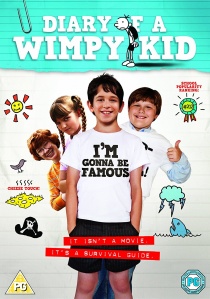 Based on the best-selling illustrated novel by Jeff Kinney, the family comedy Diary of a Wimpy Kid arrives on Blu-ray Triple Play and DVD double pack with book on 7th February 2011 from Twentieth Century Fox Home Entertainment.

Perfect entertainment for half-term, the comedy follows the adventures of wise-cracking pre-teen Greg Heffley as he struggles to survive middle school - a place where becoming popular means avoiding 'swirlies', 'wedgies' and a rotting piece of cheese with nuclear 'cooties'. His diary chronicles his thoughts, tales of family trials and tribulations, and (would be) schoolyard triumphs.

Greg Heffley embarks on middle school with trepidation as he tries to sky rocket in popularity. Greg is faced with the challenge of navigating playground politics, with little help from his pesky older brother and "uncool" best friend Rowley. It's not just a diary - it's a survival guide!

Diary of a Wimpy Kid on Blu-ray and DVD features "Greg's deleted diary pages", which are jam packed with brand-new hysterical scenes including Rowley's Lost Zoo-Wee Mama Cartoons and more from the totally gross Fregley.

HotDVDBD3D-BDUHD
The producers of Godzilla reimagine the origins of one the most powerful monster myths of all in Kong: Skull Island, released on DVD, Blu-ray, 3D Blu-ray and UHD on 24th July 2017 from Warner Home Video. END_OF_DOCUMENT_TOKEN_TO_BE_REPLACED
Top PicksView