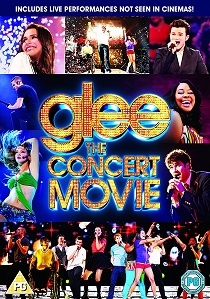 Glee, the cultural phenomenon that has inspired millions to embrace their inner-Gleek, arrives onto 3D Blu-ray and DVD from Twentieth Century Fox Home Entertainment on 5th December 2011.

Fans who weren't able to catch the sold out concerts this summer, now have the chance see the explosive on-stage performances and an intimate behind-the-scenes look at their favourite characters, in the comfort of their own home. Glee the 3D Concert Movie Blu-ray and DVD boasts exclusive footage including, two never-before-seen full length performances, Warblers footage and two introductions from Sue Sylvester, not seen in cinemas.

Glee the 3D Concert Movie features live performances of the smash hits I'm a Slave 4 U, Raise Your Glass, Teenage Dream, and Lucky, as well as the original songs that became chart-toppers such as Loser Like Me, and of course, the show's anthem, Don't Stop Believin'.

DVD
In The Undoing, released on DVD and Blu-ray 22nd March 2021 from Warner Home Video, a chasm opens up in the seemingly perfect life of a successful therapist: a violent death, a missing spouse, and a ... END_OF_DOCUMENT_TOKEN_TO_BE_REPLACED
Top PicksView