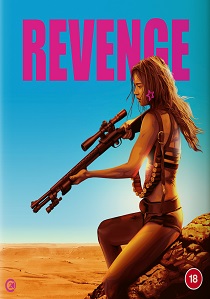 Revenge, the groundbreaking gore-fest debut from director Coralie Fargeat made a big impact on its Limited Edition Blu-ray release in 2020 and now the film arrives on Standard Edition Blu-ray thanks to Second Sight Films.

One of the most talked about movies of recent years, the film lends 'pitch-black humour and a cunning feminist agenda' (Daily Express) to the classic exploitation genre and this latest release features a host of special features, including interviews with writer-director Coralie Fargeat and star Matilda Lutz (Medici), whose performance is 'gripping - a powerful mix of Lara Croft and The Bride' says The Sun. Also included are interviews with the film's cinematographer and the composer, a new commentary and much more, please see details in full below. Revenge Standard Edition Blu-ray is released on 21 November 2021.

Entitled CEO Richard's (Kevin Janssens - Undercover) romantic getaway with his young mistress Jen (Lutz) is interrupted when his sleazy associates Stan (Vincent Colombe - Point Blank) and Dimitri (Guillaume Bouchede - Love at Second Sight) arrive early for the businessmen's annual hunting trip. Their leering advances turn ugly, culminating in a brutal attack where Jen is left for dead in the desert. Like a phoenix from the ashes, Jen rises, and now she's out for revenge. What follows is 'a bloody middle finger... a demand for reckoning... a kick in the balls with a feminine combat boot' (Rolling Stone).

DVD
The end of the line is only the beginning in a wild, non-stop thrill ride through modern-day Japan as Bullet Train is released on DVD, Blu-ray and 4K UHD 24th October 2022 from Sony Pictures Home Entertainment END_OF_DOCUMENT_TOKEN_TO_BE_REPLACED
Top PicksView