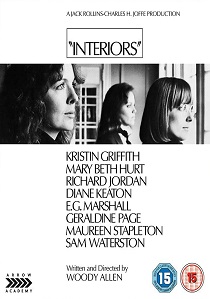 NewsDrama
News Article Go back to homepage
Three sisters try to come to terms with themselves and their family when their father Arthur decides to divorce their mother in, Interiors, the first non-comedy from writer-director Woody Allen re-released on Blu-ray on 14th November 2016 from Arrow Films.
Diane Keaton, Geraldine Page, Maureen Stapleton, Kristin Griffith, Marybeth Hurt, E.G. Marshall
Woody Allen
Charles H. Joffe
Arrow Video
1 hour 31 minutes
14/11/2016
#Interiors
Thank you for supporting DVD365.net when you order using the link(s) below. As an Amazon Associate we earn from qualifying purchases
Buy BD
Information

With Interiors, re-released on Blu-ray on 14th November 2016 from Arrow Films, Woody Allen showed the world that he was more than a comedic filmmaker with the Evening Standard's noted critic Alexander Walker remarking "Woody Allen gives us the enormous excitement of seeing gifts in use that we never suspected he possessed."

When Eve (Geraldine Page), an interior designer, is deserted by her husband of many years, Arthur (E.G. Marshall), the emotionally glacial relationships of the three grown-up daughters are laid bare. Twisted by jealousy, insecurity and resentment, Renata (Diane Keaton), a successful writer; Flyn (Kristin Griffith), a woman crippled by indecision; and Joey (Marybeth Hurt), a budding actress; struggle to communicate for the sake of their shattered mother. But when their father unexpectedly falls for another woman (Maureen Stapleton), his decision to remarry sets in motion a terrible twist of fate...

Regarded as a startling departure at the time (although it now clearly anticipates later work), Interiors was Woody Allen's first entirely serious drama, an intimate family chamber-piece strongly influenced by his beloved Ingmar Bergman and performed by a pitch-perfect ensemble cast.