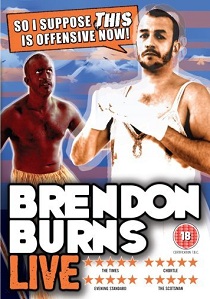 So I Suppose This Is Offensive Now!

News
News Article Go back to homepage
Should you really bother giving a homeless guy five pence, when some handy advice would probably be more useful yet equally resented? So I Suppose This Is Offensive Now!, is released by Universal Pictures (UK) on 17th November 2008.
Universal Pictures (UK)
Unknown
17/11/2008
Thank you for supporting DVD365.net when you order using the link(s) below. As an Amazon Associate we earn from qualifying purchases
Buy DVD
Information

Should you really bother giving a homeless guy five pence, when some handy advice would probably be more useful yet equally resented? Does all cultural identity physically suck? Is it sexist to hate women?

Have you spotted the inherent Socratic irony in any of these questions, laughed then secretly given the question more credence than it deserves? We could say 'then this is the show for you!' but that would imply that there may be answers or moralistic respite. There isn't but it is very funny. So I Suppose This Is Offensive Now!, released by Universal Pictures Ltd on 17th November 2008, is the show that won Brendon Burns the coveted if.comedy Award at the Edinburgh Festival in 2007.

After a series of sold-out runs at the festival, this was the one that everyone was talking about. Controversial, shocking and explosive, the Aussie shouts and rants against particular age-long stereotypes and gains a whole new army of devoted fans. Brendon's style of comedy is described as edgy, aggressive and provocative as well as continually absorbing; he challenges your preconceptions and encourages debate while making you laugh (or wince!).

Brendon Burns is a veteran stand up comic having been on the circuit since the 1990's. His TV credits include a stint as host on the spontaneous comedy programme The Eleven O'Clock Show (Channel 4) and appearing (albeit briefly!) as a presenter on I'm a Celebrity...Get Me Out of Here Now! (ITV2).

He has stormed audiences the world over with his electric performances and is fast becoming a cult comic. The So I Suppose This Is Offensive Now DVD shocks and entertains in the same breath and is a must-have for any true 'stand-up' comedy fan.

DVD
For the first time in the cinematic history of Spider-Man, our friendly neighborhood hero's identity is revealed in Spider-Man: No Way Home, released on DVD, Blu-ray and 4K UHD 4th April 2022 from Sony Pictures Home ... END_OF_DOCUMENT_TOKEN_TO_BE_REPLACED
Top PicksView