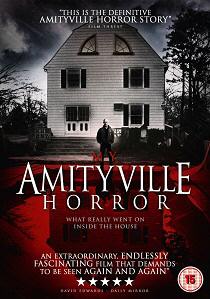 For most people, Amityville Horror was just a movie, but for Daniel Lutz, who lived at the infamous house at 112 Ocean Avenue in Amityville, New York, it was real life.

In 1975, when Daniel was 10, his family lived there for just 28 days before fleeing in terror, the victims of widespread supernatural happenings that pushed them to the brink of madness and had them fearing for their lives. A media circus began that never fully ended.

Up until their recent deaths, his parents George and Kathy Lutz, never went back on a single claim. In the 35 years since the ordeal, Daniel has never spoken on the record about his experiences. This is his story, in his words.

For the first time in 35 years, child eyewitness Daniel Lutz recounts his version of the infamous Amityville haunting that terrified his family in 1975.

My Amityville Horror, available to own on DVD on 28th October 2013 courtesy of Arrow Films, is a gripping documentary that details the struggle behind growing up as part of a world famous haunting and shows that while Daniel's facts may be other's fiction, the psychological scars he carries are all too real.

Ed and Lorraine, who were most recently featured in the horror-smash hit The Conjuring, are seen throughout the documentary in rare photographs examining the house. Lorraine, now 86, also stars in the movie and is featured meeting Daniel Lutz in as they discuss the infamous house and her recollections of it.

At The Conjuring press junket in San Francisco recently, Lorraine Warren was asked how the 1971 case of the Perron family in Harrisville, Rhode Island, which inspired The Conjuring, compares with the horror that the Lutz family experienced in Amityville, New York back in the mid '70s.

Warren laughed, as if there is no comparison at all. "Amityville was horrible. It was absolutely horrible", she said. "I don't even like to talk about it. I will never go in the Amityville house ever again. You know how long my career is and that's the only one."

Warren's career is indeed long and she and her husband investigated well over 4,000 cases in their time. So when Warren says that the Amityville house is the one haunted house she won't return to, it's apparent that something terrifying went down there.