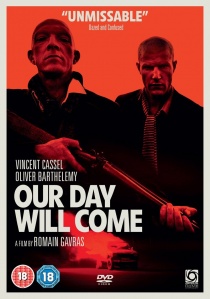 News Article Go back to homepage
he directorial debut of Romain Gavras, best known for his controversial Music videos for M.I.A and Justice, Our Day Will Come, out to own on DVD and Blu-ray from Optimum Home Entertainment on 22nd August 2011, is a bold and savagely humorous outsider epic, telling the story of Patrick and Remy a pair of outcasts joined together by their dislike of society and their own red hair.
Rodolphe Blanchet, Boris Gamthety, Vanessa Decat, Justine Lerooy, Olivier Barthélémy, Vincent Cassel
Romain Gavras
Alexandra Swenden, Éric Névé, Adrien Magne, Vincent Cassel
Optimum Home Entertainment
1 hour 30 minutes
22/08/2011
Buy DVD
Buy BD
Information

The directorial debut of Romain Gavras, best known for his controversial Music videos for M.I.A (Born Free) and Justice (Stress), Our Day Will Come, out to own on DVD and Blu-ray from Optimum Home Entertainment on 22nd August 2011, is a bold and savagely humorous outsider epic, telling the story of Patrick (Vincent Cassel) and Remy (Olivier Barthelemy) a pair of outcasts joined together by their dislike of society and their own red hair.

Patrick is a charismatic but cynical therapist, long bored with listening to the banalities of his clients' problems, he is desperate for any situation he can manipulate for his own amusement. A defining opportunity comes in the form of Remy, an awkward, alienated teenager, bullied by his family and ostracized by his peers who use his red hair as prime ammunition for their taunts.

When Patrick stumbles across Remy one night as the boy is running away from home, sparks fly between them immediately. On a whim Patrick offers him a ride and begins to play, winning his trust then, determined to toughen him up, pushing him into ever more extreme and dangerous situations. Before long the goading unlocks both Remy's longing for acceptance and capacity for violence and the roles are reversed as Remy leads them on an anarchic road trip looking for revenge and retribution on their way to Ireland, the symbolic paradise for redheads, where they hope to find freedom.

Our Day Will Come is both a violent exploration of alienation and racism and a surreal, pitch-black comedy. Andre Chemetoff (Dog Pound) delivers breathtakingly vivid and atmospheric cinematography to a pulsating electro score by SebastiAn.

Our Day Will Come arrives from Kourtrajmé productions, an artists' collective formed in 1994 by Romain Gavras and Kim Chapiron (Sheitan, Dog Pound), that has grown to over 135 members including regular collaborators Vincent Cassel and Mathieu Kassovitz (La Haine). It also reunites Vincent Cassel and Olivier Barthelemy's incendiary pairing first seen in Chapiron's Sheitan

DVD
Get lit in the stylish ensemble caper, The Gentlemen, a star-studded, sophisticated action-comedy written and directed by Guy Ritchie, released on DVD, Blu-ray and 4K UHD 27th April 2020 from ... END_OF_DOCUMENT_TOKEN_TO_BE_REPLACED
Hot PicksView