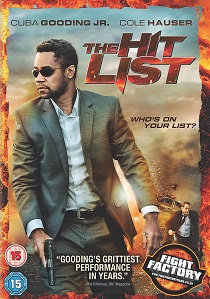 What if someone you jokingly wished dead... was suddenly killed? Sony Pictures Home Entertainment answers that provocative question in the shocking new action thriller The Hit List, available on DVD on 9th May 2011.

Ever wish you had the chance to get back at the boss who undermined you...the spouse who cheated on you...or the friend who deceived you? One night, a down-on-his-luck businessman, Allan Campbell (Hauser), meets a mysterious stranger, Jonas Arbor (Gooding Jr.), who claims to be a professional hit man. Jonas offers to take out five targets, free of charge. Thinking it's a bad joke, Allan jots down his own private hit list. The next day, the people he named start turning up dead, and all the evidence points to Allan. Hunted by the police and haunted by guilt, Allan races against time to stop the murders he set in motion. In this world, vengeance always has a price.

UHD
Fast forward to the 1980s as Wonder Woman's next big screen adventure finds her facing a wide array of foes including Max Lord and The Cheetah as Wonder Woman 1984 flies in on Blu-ray and 4K UHD 22nd March 2021 from Warner ... END_OF_DOCUMENT_TOKEN_TO_BE_REPLACED
Top PicksView