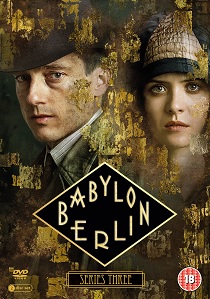 The lavish, 40 million dollar series is Germany's most expensive drama to date, and explores a metropolis in turmoil: poverty stands in stark contrast to the excessive indulgence of the night life in a city on the brink.

Series three begins in the Autumn of 1929, during the tumultuous weeks before Black Friday's stock market crash, and 10 months after the turbulent events of the second series. Inspector Gereon Rath (Volker Bruch) and Charlotte Ritter (Liv Lisa Fries) are assigned to investigate the violent death of a silent film actress. As talkies start conquering the big screen and Berlin becomes a hub of modern cinema, the pair soon realise the film industry is as rotten as the criminal underworld they are all too familiar with.

BD
In The Duke, released on DVD and Blu-ray 13th June 2022 from Warner Home Video, Kempton Bunton, a 60 year old taxi driver, steals Goya's portrait of the Duke of Wellington from the National Gallery in London. END_OF_DOCUMENT_TOKEN_TO_BE_REPLACED
Top PicksView