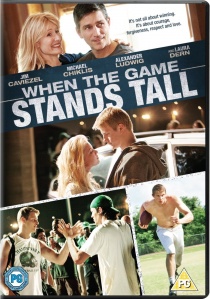 Directed by Thomas Carter (Coach Carter) and adapted from the novel of the same name, the film follows the incredible winning streak of the De La Salle High School football team -- 151 straight victories over 12 years. But when "the streak" is finally broken and the team suffers a series of real-life adversities, Coach Ladouceur must teach his players - and the entire town - that it's not about how you fall, but how you get back up. The film co-stars Golden Globe® winner Michael Chiklis (Best Actor, TV's The Shield, 2003), Alexander Ludwig (The Hunger Games), and Academy Award® nominee Laura Dern (Best Actress, Rambling Rose, 1992)

When The Game Stands Tall from a story by Scott Marshall Smith and David Zelon and a screenplay by Scott Marshall Smith based on the novel When The Game Stands Tall: The Story of The De La Salle Spartans and Football's Longest Winning Streak by Neil Hayes. Cathy Schulman, David Tice and Thomas Carter serve as the executive producers with David Zelon as the producer.

Inspired by a true story, When The Game Stands Tall tells the remarkable journey of legendary football coach Bob Ladouceur (Jim Caviezel), who took the De La Salle High School Spartans from obscurity to a 151-game winning streak that shattered all records for any American sport. When the streak is broken, and tragedy strikes the team, Coach Lad must teach his players - and the entire town - that it's not about how you fall, but how you get back up.