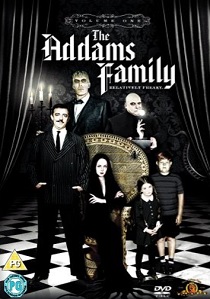 TV's favourite, but all together ooky family, The Addams Family, is being released on DVD for the first time in all its ghoulish glory! This deliciously dark comedy from the 1960s can now be enjoyed by the whole family. Revisit Morticia, Gomez, Uncle Fester, Pugsley, Wednesday, Grandmama, Lurch and Thing, if you dare, with The Addams Family: Volume 1 released on DVD on 9th April 2007 by Twentieth Century Fox Home Entertainment.

The Addams Family is definitely not your typical family! Descendants of a long line of witches, freaks, ghouls and other assorted outcasts, they take delight in the things that would terrify "normal" people. Mum and Dad - Morticia (Carolyn Jones) and Gomez (John Austin) Addams are still madly in love after all the years, and have regular romantic dinners in the cemetery next door. That might just be TV's most functional family.

Uncle Fester (Jackie Coogan) carries an electrical charge and illuminates light bulbs with his teeth. Evil genius Pugsley (Ken Weatherwax) and sweet tempered Wednesday (Lisa Loring) regularly guillotine their toys, while Grandmama (Marie Blake) a bona-fide witch, concocts spells, potions and hexes of all kinds. Lurch (Ted Cassidy), a massive, Frankenstein-style monster and the family's butler is Wednesday's best friend and Thing is a hand, severed at the wrist, that can appear at a moment's notice anywhere in the house and has been Gomez's confidant since childhood.

The Addams Family: Volume 1 features a collection of unforgettable episodes including The Addams Family Goes To School, where Moritica and Gomez are mortified to learn that Wednesday's classroom reading includes Grimm's Fairy tales, a selection of stories where witches, ogres and other "evil" beasts are slain! Halloween with the Addams Family tells the story of what happens when some very unfortunate burglars attempt to rob the family on Halloween, and get drawn into their bizarre family customs.

Special features include audio commentaries by the cast, a selection of featurettes, stills galleries and a chance to sing along to the unforgettable theme tune with a karaoke option!

UHD
A 13-year-old girl named Meilin turns into a giant red panda whenever she gets too excited in Disney and Pixar's 25th feature film Turning Red, released on DVD, Blu-ray and 4K UHD 2nd May 2022 from Walt Disney Home ... END_OF_DOCUMENT_TOKEN_TO_BE_REPLACED
Top PicksView