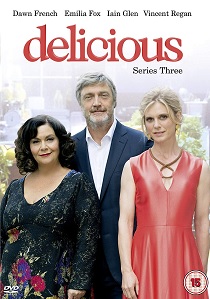 Following the huge popularity of the first two series' Sky One serves up a third helping of Delicious, one of its most successful series ever, bringing the perfect pairing of Dawn French and Emilia Fox back to our screens. The tasty series three is set to arrive on DVD 28th January 2019, alongside Delicious Series One - Three Box Set, courtesy of Acorn Media International. The complete series will also be available on digital to download and keep from 19th January 2019.

Passionate cook Gina (Dawn French - French and Saunders) was once married to Leo Vincent (Iain Glen ­ Jack Taylor), a successful entrepreneur, chef and hotel owner in Cornwall. Leo owes much of his success to Gina's exceptional cooking, but since leaving her for the glamorous Sam (Emilia Fox - Silent Witness), his business has continued to thrive. When Sam has suspicions that Leo is having an affair, she confides in Gina but the secrets and scandals that spill out are proof that sleeping with another woman's husband is never a good idea even if he was your husband first.

In series three we return to the Penrose hotel, where Sam and Gina are hosting a glamourous charity auction. Still working and living together, not quite as best friends, following Leo's adulterous legacy, the two ex-wives appear united but have very different visions for their future. How long can this harmony last?

When Teresa (Tanya Reynolds - Rellik) arrives home from travelling unexpectedly and without Michael, she trusts Mimi (Sheila Hancock - Kavanagh QC) with a secret ... but it turns out Mimi is guarding one of her own. The arrival of charismatic chef and restauranteur, Mason Elliott (Vincent Regan - Troy) might just throw a grenade right at the heart of Sam and Gina's relationship. These two couldn't fall for the same man again, could they?

UHD
Fast forward to the 1980s as Wonder Woman's next big screen adventure finds her facing a wide array of foes including Max Lord and The Cheetah as Wonder Woman 1984 flies in on Blu-ray and 4K UHD 22nd ... END_OF_DOCUMENT_TOKEN_TO_BE_REPLACED
Top PicksView