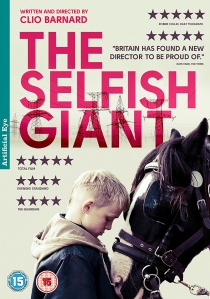 The Selfish Giant, released on DVD and Blu-ray on 27th January 2014 by Artificial Eye, is a contemporary fable about 13 year old Arbor (Conner Chapman) and his best friend Swifty (Shaun Thomas).

Excluded from school and outsiders in their own neighbourhood, the two boys meet Kitten (Sean Gilder), a local scrap-dealer - the Selfish Giant. They begin collecting scrap metal for him using a horse and cart. Swifty has a natural gift with horses while Arbor emulates Kitten - keen to impress him and make some money. However, Kitten favours Swifty, leaving Arbor feeling hurt and excluded, driving a wedge between the boys. Arbor becomes increasingly greedy and exploitative, becoming more like Kitten. Tensions build, leading to a tragic event, which transforms them all.

Clio Barnard's second feature, which premiered to universal acclaim at Cannes, is one of this year's key British releases. Boldly cinematic and featuring astonishing performances from the two leads, The Selfish Giant further cements Barnard's reputation as a visionary film maker.

3D-BD
After escaping an attack by what he claims was a 70-foot shark, Jonas Taylor must confront his fears to save those trapped in a sunken submersible as The Meg arrives on DVD, Blu-ray, 3D Blu-ray, 4K ... END_OF_DOCUMENT_TOKEN_TO_BE_REPLACED
Hot PicksView