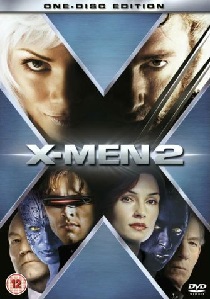 When the President of the United States is attacked in the Oval office by a mysterious teleporting mutant the shocked officials start talking about the introduction of the dreaded mutant registration act. However, military general William Stryker has a different idea. By showing the president images of Professor Xavier's school for "gifted" children and images of a mysterious aircraft leaving the school the president gives him permission to do whatever is necessary to bring the mutant terrorists under control.

Fearing for the worst, Professor Xavier sends out Jean and Storm to locate the mysterious mutant responsible for the attack on the president whilst Xavier and Cyclops head for Magneto's prison cell to see if he is behind the latest attack. However, Stryker's intentions for Professor Xavier and his students go far beyond his remit and he puts into action his plan to eradicate the mutants, beginning with an offensive on the Xavier's mansion and school. With Wolverine being the only member of the X-Men still at the school, Stryker and his crack troops carry out a relatively unopposed night attack and force Wolverine and the students to flee.

With Stryker now free to explore the school at will he heads straight for the X-Men's lair and the secrets of Xavier's mind reading device "Cerebro". With the power of Xavier's device now in his hands he can finally carry out his threat to rid the world of all mutants. However, he hadn't bet on the daring escape of Magneto from his plastic prison cell and the roving Wolverine out for revenge and information about his past. And when the remaining X-Men join forces with Magneto they become a powerful, and completely unexpected, fighting force against Stryker. But can the mutants put a stop to his plan before its too late?

Rather than compromise on the audio and visual quality, Twentieth Century Fox have had the forethought to move the extras to their own disc and use all of the available space for the audio and image transfer. And boy, what a cracking decision it was to make and I think some Fox executive is a home cinema fan. The visuals are simply stunning with a level of detail and colouration which push the bounds of DVD technology to the limit. With plenty of dark costumes and interiors the black levels are excellent throughout and there is no sign of the grain or edge enhancements which can trouble such films. And with no extras to constrain the bitrate, the transfer is near perfect with no signs of dust scratches or other picture imperfections. This is definitely a disc for showing off that expensive plasma television or projector.

Like the picture, the sound is something to behold. Although extensively compressed to allow for the high image transfer and the Dolby Digital and DTS soundtracks, both versions will give your system a good workout. Both soundtracks offer dialogue which is clear and precise in the centre channel along with some good stereo separation at the front. Some recent action films have really neglected the surround channels, using them sparingly and then only for the musical score, but X-Men 2 puts them to good use with plenty of ambient and action effects. My only criticism would have to be the lack of a Dolby-EX or DTS-ES soundtrack. Mind you, I'm not sure whether there would have been any space for them both.

The dialogue and action levels are well balanced and once a comfortable listening level is reached there is never any really need to keep adjusting the volume levels. This is always important when considering your friendship with the neighbours and the sleeping kids you couldn't palm off on your mothering law for the evening. Even the LFE channel is not neglected and the occasional rumble can be heard during the more intense moments. Although both soundtracks more than deliver the goods, it is the remarkable separation of the DTS soundtrack that ensures that it is the preferred option. However, no matter which soundtrack you choose it is still corking good audio.

Whilst previous Twentieth Century Fox releases have lead the way with their clever menu designs, the menu on X-Men 2 is rather plain and boring by comparison. Although you could argue that fancy animated menus eat up valuable disc capacity these appear to have been thrown together with apparent little thought. Fortunately, it does appear to be a space issue as whilst the menus on disc one are rather restrained in their appearance, the menus on the second disc are far more actively animated and scored.

Although it took two attempts to before we got the DVD release X-Men deserved, Fox have got it right first time with two different releases. One version is a single disc edition with no extras (which will most likely be the version available at your local rental shop) whilst the other is a two disc special edition bursting with all sorts of interesting extras. If you've ever wanted to know something about the world of the X-Men then your pretty sure to find it here.

The highlight of the extras must be the Audio Commentary tracks which accompany the film on disc one. The commentary with director Brain Singer is certainly the better of the two yack tracks as he spends the whole of the film divulging a huge range of interesting facts about the production and off-screen antics by the cast and crew. But it is the second disc where the holly grail of facts and figures about X-Men 2 exist. In fact, there are so many it will take you a good few hours to visit them all. The extras are split into four main sections; History of the X-Men, Pre-production features, Production documentaries and Post production featurettes. There's also an amazing Gallery containing over 800 images and sketches, 11 Deleted Scenes and a collection of Trailers.

Highlight of the Featurettes must go to the extremely interesting Making of X-Men 2 featurette. Running at just over an hour it goes behind the scenes with director Bryan Singer and friends. If you didn't learn enough facts from listening to the audio commentary then you'll learn even more here. In fact, I don't think there's one poor featurette between them. Even the deleted scenes are interesting and worthy of a viewing. The 11 scenes are essentially extended scenes which must have been cut for timing purposes and it's a great shame they weren't reintroduced for the DVD release. It also raises the interesting question of a future director's cut with these scenes restored to the film.

Although I don't read comic books I've been told by fans of X-Men that X-Men 2 follows the comic much closer than the first film. Also, being a sequel there is no need to spend half the film introducing the various characters. As a result X-Men 2 can get straight down to business and avoid the overly long introductions. Although more characters are introduced, such as fans favourite Nightcrawler, you quickly get into film without worrying about character profiles and, to a lesser extent, having to have seen the first film. And for me, and even though it is a sequel, this is what makes this much darker film the best comic to screen adaptation yet.

And what about X-Men 3? Well judging by the interviews with the cast and crew it certainly looks like one is on the cards. Let's just hope it doesn't go the way of the Batman franchise and loose the plot. Mind you, after getting their reputations tarnished with other Marvel character film adaptations, it looks like the guys at Marvel have got a grip on things and won't allow plot less rubbish to grace the silver screen again.

With its superb picture transfer, awesome sound and outstanding extras I'm sure you'll find X-Men 2 hard to resist. And if you're considering the single disc version? Just remember that for a few extra notes you can access a whole wealth of interesting extras. But then again, if you're a fan you'll already be opting for the special edition set. Highly recommended.