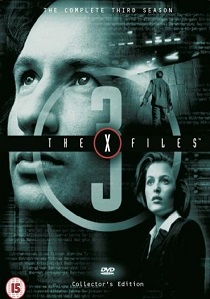 Fox "Spooky" Mulder works for a division of the FBI dealing with the paranormal and unexplained. He is a firm believer in existence of extra terrestrials, after his younger sister was apparently abducted by aliens when he was a boy. It was an event which haunts him day and night and it remorselessly drives him on in his quest for proof.

Dana Scully is a serious-minded, and sceptical, medical scientist who has been assigned to join Mulder on the X-Files in order to "de-bunk" his investigations and report her findings to a higher authority. Although she is a sceptic to the last, she has also been witness to many strange and unexplained phenomena that even her scientific analysis can't explain.

As their investigations continue Mulder is more and more convinced that a government conspiracy is at work and they have been covering up the existence of extra terrestrials along with their attempts at creating an alien-human hybrid. Scully has also become slightly less cold on the idea, especially after her apparent abduction and the discovery of a minute computer chip embedded in her neck. However, things are going to worse for Scully when she learns that she has a very aggressive form of cancer which is inoperable.

There are four episodes per disc, with disc seven containing the extras, giving a running time of approximately 2 hours 56 minutes per disc. The episodes in the box-set are as follows:-

The picture quality is much improved over the previous two box-sets and it continues to exceed the quality of the VHS videos. As is the norm with the X-files, there are plenty of challenging dark and gloomy scenes. Fortunately, they are handled with ease with no real signs of artifacting, outlining or edge enhancements. Needless to say, based on the picture quality of the previous box-sets, I was impressed.

Although the picture quality is vastly improved, the sound is still average with a functional rather than exciting soundtrack. The dialogue is certainly clear enough and you can easily hear the many shouts of "Scully!" and "Mulder!" The lack of decent ambient effects really does effect the overall suspense of many of the episodes. It's just a great pity that Fox couldn't remaster the soundtrack into something more acceptable, after all you are paying nearly 70 pounds for the privilege of owning the set.

The seven discs are presented in a pleasant fold out box-set, although I suspect that the paper case spines could become damaged over time. The booklet is quite useful, with chapter listings for each episode, even if the subsequent episode listings of the other seasons are a little useless. As usual the box-set is delightfully presented and it certainly adds to the value of the set, which it definitely should do given the price.

The only thing that spoils the box-set are the BBFC certificate notices and a barcode on the rear of the set. The extras are certainly improving with a couple of the episodes containing an audio commentary and deleted scenes. However, the usual filler material is still present with the ever annoying television spots and international clips. Yet again Chris Carter talks about his favourite twelve episodes from the season (so what was wrong with the other twelve then?).

With the appeal of the X-files reaching nearly all corners of the globe, and with the money pouring into the coffers of Fox from all directions, it was only fair that some of this money was pumped back into the series. This is certainly the case with the some vastly improved special effects and scenery. It even manages to dispense with too many of the dark warehouses scenes with only an FBI issued torch for lighting.

Until seeing this season again I'd actually forgotten just how good a season it was. I had previously preferred the second season, however, I've changed my mind as this set contains some of the best ever, award winning and damn right bizarre episodes.

Highlights of the season must be Clyde Bruckman's Final Repose when they are on the trail of an apparent psychic murderer and the extremely funny War of the Coprohages where we get to see Scully's really jealous side. We even get our first introduction to the black oil that figures so prominently in future episodes and subsequent season. In fact, the first disc of season three is probably one of the best evenings viewings a fan of the X-files can have and it's almost worth the price of the box-set alone.