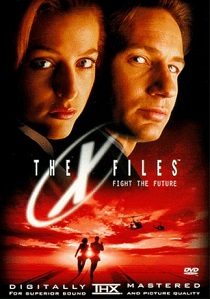 The films starts 37,000 years ago with some brave locals hunting and killing a strange alien in an ice cave. For followers of the television series we get our first viewing of the mysterious black oil which has been the bane of many an X-files episode. We then jump to the present day where an unfortunate child discovers both the cave and the oil. Cue the intervention of top level government agents and the usual cover up.

We next see Dana and Fox carrying at their normal FBI duties during a terrorist bomb alert in Dallas. However, the pair soon become suspicious of the unfolding events. When the bomb destroys a building (parallels with the Oklahoma bombing anyone?) some of the casualties in the explosion just don't add up.

During a drinking session Mulder exits the bar to relieve himself (peeing on an Independence day poster!) he meets with a doctor who babbles on about the bomb exploding and a deadly alien virus which could spell the end of humanity. The search for the truth soon pits them, yet again, against the mysterious Syndicate, powerful men who will stop at nothing to protect their deadly secret.

The film is basically a two hour episode with a bigger budget for the special effects and explosions. However, the money is spent wisely with a superb THX soundtrack along with the plentiful use of helicopters, and other flying objects, in the surround channels. However, there is one annoying thing with the soundtrack. You sit there wondering why the surround is so poor until you realise that it has defaulted to 2.0 and you have to select the 5.1 from the set-up menu. The picture is very dark at times and can also be very busy (just put on the bit rate meter if you have one) but to get the THX certification it needs to be, and is, good.

You don't really need to be a follower of the X-files series, but it helps, as the story will be a lot more meaningful, plus you'll miss the clever humour between the pair. Chris Carter has been very clever in creating this film. For the die hard fans it continues from the end of the previous series and indeed continues into the next, but for the casual viewer it is still an informative film.