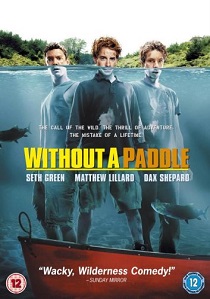 ReviewComedyAdventure
Review Article Go back to homepage
After finding a map, three close friends go in the search for the legendary treasure of D.B Cooper. However, without a clue of the great outdoors the trip turns out not as fun they'd first thought.
Antony Starr, Dax Shepard, Matthew Lillard, Seth Green, Nadine Bernecker, Danielle Cormack, Rachel Blanchard, Christina Moore, Burt Reynolds
Comedy, Action/Adventure
2
1 Hour 34 Minutes
Thank you for supporting DVD365.net when you order using the link(s) below.
Buy DVD
Story

Whilst going through the belongings of a childhood friend who recently died, long time friends Jerry, Tom and Dan come across an old treasure map created by their recently deceased friend. Out of respect to their friend, and wishing to fulfill a childhood dream, the three friends decide to go to Oregon, and with the help of the newly discovered map, search for the legendary treasure of D.B Cooper, the hijacker who leapt from a plane with over $200,000 of booty and was never to be seen again.

However, it soon proves to be a rather ill-fated trip as it becomes apparent that none of the troop has the slightest idea about how to tackle the great outdoors. With copious amounts of beer replacing any useful utensils or supplies, it's questionable whether they'll last more than a few days. Still, what use is an adventure without a months supply of beer and a compass of suspicious reliability and origin?

Fortunately, by total fluke or a miracle of nature, they are able to survive everything which is thrown at them, including a bear invading their campsite and treating Dan as its cub, a dangerous canoe trip down a rapid and waterfall filled river, an encounter with a group of environmentally conscious young women who are living up a giant redwood tree and don't seem to mind their hairy legs plus a group of heavily armed, but short on brains, farmers who'd rather not let people know what they are growing.

For such a recent theatrical release the transfer should be nothing but perfect, and fortunately that's what we have here. The colours are rich and bold, black levels are solid, whilst the colour depth and detail is extremely impressive throughout. Given the number of night time scenes and rain rain downpours the picture doesn't suffer with either artifacting, outlining or edge enhancement problems. The print is in good condition and there are no real problems with either dust specks or other forms of print damage.

The 448 Kbps Dolby Digital 5.1 soundtrack is reasonable enough and is more than capable for a film of this genre with some good stereo separation in the front channels whilst the dialogue is clearly audible in the centre channel throughout. The surround channels are also used to some good effect, especially in the second half of the film when the three are fleeing through the woods pursued by the rather irritated, and heavily armed, farmers. The only real downside was the lack of LFE effects and they were especially lacking during some of the more manic moments, with one prime example being their unscheduled trip down the rapids.

The menu system is nicely scored and animated with some long cut scenes from the film whilst there's a good selection of extras to keep the fans happy. The menus are well designed and laid out, but one minor criticism is the actual navigation around the menu. The menu selector is a red cursor and when placed on the similar coloured menu backgrounds it's actually quite hard to see which menu you've got selected.

The film is accompanied by two Commentary tracks, one by director Steven Brill and another, in a novel video form, with the cast and director. The most fun of the two commentaries has to be the Video Commentary where a small box appears on the screen where you can see the cast and director sat in a studio talking about the film. However, this can also be rather confusing as at random points the box simply disappears (making me initially think there was something wrong with my DVD player) then reappearing at an equally random moment at a different position on the screen. The commentary is interesting enough with the director occasionally prompting the cast members for their opinions on certain scenes. Whilst there's the usual banter between them they do manage to provide some interesting information about the filming. However, if you want a far more sensible and detailed commentary on the film then you'll need to opt for the Commentary by Director Steven Brill.

The eighteen minute MTV Making the Movie feature is interesting enough as it goes behind the scenes with plenty of on the spot interviews the cast. However, it's more interesting to see how the group were trained in canoeing on the rapids along whilst the introduction to the massive, and amazingly tame, grisly bear called Bart and it's brave trainer is an interesting diversion. There's also a look at the minimal use of special effects for the interaction with the bear and various leaps off cliffs. As usual, these effects are shown seamlessly in the film and it just goes to show how easy it is for the camera to lie. Whilst this feature is simply the usual promo fluff, it is all the more unusual for being more interesting than most promotional features. It's definitely worth a look in and certainly adds some interest to the extras.

Also included are 13 Additional Scenes. Running for a total of twenty three minutes they can either be viewed in one chunk or individually selected over two menus. There's also the welcome option of an Audio Commentary from the director so we can hear from the horses mouth as to why they were deleted or trimmed from the film. However, he doesn't really say too much about them, but the usual pacing issues seem to the general reasoning behind the cuts. Rounding things off are the Theatrical Trailer and a number of Television Spots. All in all, it's not a bad selection of extras at all.

Without a Paddle is a cross between Road Trip and The Great Outdoors. Trouble is, although it's reasonably funny in places, it's a rather poor road (or should that be canoe?) trip movie, and there's no John Candy either. It's either that, or I'm getting too old to appreciate these sorts of movies, teenage audiences are dumbing down, or it's simply the fact that these sorts of films have run their course. Still, the cast is reasonable enough, and they do appear to be having fun both on and off camera. It's also great to see Seith Green in a much meatier role than normal, plus his goofing around on and off set is certainly fun to see.

If you like your goofy road trip movies and cheap jokes then you're obviously a teenager and thus are bound to enjoy this harmless piece of fun film. Sure, it's all a little dumb and there are much better teenage films out there, with Road Trip and the American Pie trilogy being much better than most, but with a MTV generation to entertain, Without a Paddle goes someway to providing it. Put this with the rather good collection of extras and you have the perfect disc for its target audience of teenagers. Everyone else should probably stay well away.