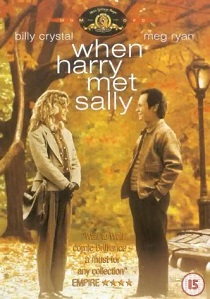 Lisa Jane Persky Alice Synopsis Two people meet eleven years after sharing a car on a trip from Chicago to New York. Film When Harry Burns and Sally Albright travel together from Chicago to New York, Harry states that men and women can never have a friendly relationship. Sex always gets in the way. They can't agree on anything and they are glad when the trip is finally over and go their separate ways, even though they won't admit that there is some chemistry between them.

Eleven years after the trip they bump into each other at an airport and thus their friendship is rekindled with that question still hanging over them. As their own relationships fail they become the best of friends and, although their friends around them know that they would make the perfect couple, they still continue to deny that they were truly meant for each other. Will they ever take the plunge?

The picture is superb with an exceptional amount of detail for a film of this age. Although the colour is a little washed out it still manages to outshine many other back catalogue titles of a similar age. The bit-rate remains about average throughout the film and there are no signs of artifacting or outlining.

The soundtrack has been re-mastered to Dolby Digital and, although it is another dialogue intensive film, the ambient effects and musical score manage to find their way to the rear channels. The dialogue is crisp and clear in the centre channel and there was never any need to adjust the volume control throughout the film.

The menu is animated and scored with a wonderful set of extras. These include an interesting 33 minute Making of documentary, Deleted Scenes and an enthusiastic Audio Commentary from director Rob Reiner. There is also the addition of Theatrical Trailer and Music Video. These extras really do make this classic film a real DVD winner.

This is the romance comedy that launched a thousand copycats, and indeed launched the career of Meg Ryan to star a thousand romance film copycats. However, it is the amount of effort which has gone into this disc that amazes. Most companies are profiteering by just sticking any old back catalogue material on a DVD and charging full price. Although you are paying full price for this disc, you do get an excellent variety of extras and superb picture and sound. Well worth adding to your DVD collection.