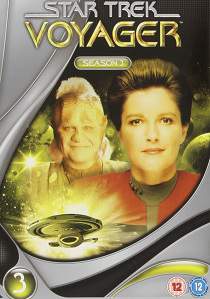 While pursuing a ship of Maquis dissidents, captained by their leader Chakotay, Captain Kathryn Janeway and her crew of the USS Voyager encounters an alien life-form known as the Caretaker who, dieing of old age, is looking for a replacement to oversee a peaceful species known as the Ocampa. But in order for the Caretaker to vet these new candidates they are pulled into the Delta Quadrant, a region of space over seventy thousand light years from the nearest Federation space. But when the Maquis ship is destroyed, and Captain Janeway is forced to destroy the portal that brought the two ships to the Delta Quadrant, the two crews are forced into a fragile alliance as they begin their long and arduous journey home.

As season three progresses Captain Kathryn Janeway and the crew of the USS Voyager are continuing their struggle a cross the space that separates the Delta and Alpha Quadrants. As their endless journey continues they meet both new friends and come across new enemies in the form of the Borg and the even greater danger of Species 8472, a species so powerful that it can destroy a Borg armada with ease.

The picture quality is much improved over the Star Trek : The Next Generation series with a colour definition which is far richer and more detailed than before. There can be the usual problem with the conversion from NTSC to PAL, but on the whole things are handled with relative ease. Never the less, there can still be problems with grain, outlining and pixelisation, especially on fast moving action scenes with stationary backgrounds. Never the less, it is certainly far better to anything video could offer and for a television series which was originally broadcast before the medium of DVD was established, you couldn't really be expecting anything else.

Although the series boasts that it has been remastered to Dolby Digital 5.1 for the DVD release it has had little real effect and, to be honest, it doesn't really seem worth while the time, money and effort. Both the English and German 384 Kbps soundtracks have been remastered to full blown 5.1, whilst the Spanish and Italian soundtracks don't appear to warrant any improvement and remain as 192 Kbps stereo.

With this amount of capacity soaked up on the disc there is very little room for anything particularly dynamic and, other than the opening credits when Voyager zooms from the rear to the front of the soundstage, there is very little activity in the surround channels. Fortunately, the dialogue is crisp and clear in the centre channel whilst the front stereo channels manage to provide some reasonable stereo steerage. However, for a series which has its roots firmly placed in the terrestrial television schedule, it is no surprise that the sound is anything but functional.

The menu system is pleasantly animated and scored with the series theme tune as well as the background rumblings of Voyagers engines. Navigation around the menus is easy enough with only the episodes and subtitling options available on each main disc. However, along with the final two episodes of the season, the extras are contained on the rather confusing seventh disc. Although the menus are similarly designed, there is an element of clumsiness to them with a menu depth which far too deep for easy navigation and this results in the Easter eggs being rather easy to locate as you blunder around the menus.

As for the extras, the presentation box-set can certainly be classed as one, as in keeping with the Star Trek : The Next Generation and Deep Space Nine DVD collections, the discs are presented in wonderfully designed box-set (although, as I couldn't locate a suitable 2D image, the image used for the review is a generic Voyager cover from the rather plain looking US release).

Owners of the previous two seasons will already know what's in store in the extras department and season three continues with a good set of in depth features and interviews with the cast and crew that Trekkies will relish, although an outtake reel would have been a perfect additional the collection. Image quality on each of the featurettes is nothing special, with the good old NTSC to PAL conversion playing havoc with the reds, but on the whole the transfers are more than sufficient for the extras material, plus they are also subtitled.

In the Braving The Unknown: Season Three featurette the stars, writers and producers of the series talk about their favourite episodes (usually episodes with their character being at the centre of the plot) as well the writers, rather worryingly I might add, talking about how they came up with scripts ideas after the end of the previous seasons cliff-hanger as well as a general chit-chat about how the season progressed. Next up are two Voyager Time Capsule featurettes looking at Neelix and Kes. Both featurettes have their respective actors Ethan Phillips (who also appears on the Kes Time Capsule feature) and Jennifer Lien talking about their roles, although the Neelix featurette is the more interesting of the two.

In an exclusive to the region two release, the Creating The Voyager Crew featurette has series creator Michael Piller discussing each of the shows main characters. He is ably assisted by plenty of action clips from the programme plus an introductive clipping from the ever handy Star Trek Voyager bible. The cracking Flashback To "Flashback" featurette looks at how the script writers and design team managed to recreate scenes from Star Trek VI: The Undiscovered Country including a guest appearance from Sulu himself - George Takei. Although the episode only contained Robert Beltran and Kate Mulgrew, George talks enthusiastically about his time on the Voyager set and it's nice to see one of the originals being rolled out every now and again.

The Red Alert! Amazing Visual Effects featurette interviews visual effects producer Dan Curry and visual effects supervisor Ronald B. Moore about how they went about creating the effects for Basics Part II, Future's End, Distant Origin, Macrocosm and Scorpion Part I. Whilst the majority of these effects can't match a big budget Hollywood movie, with many obvious looking CGI effects, there is the occasional gem and the lava scenes in Basics Part II look particularly effective. The Real Science With André Bormanis featurette looks, unsurprisingly, at the real science behind the series. Along with astrophysicists Neil Tyson and Sallie Baliunas they come up with facts and plausible explanations for worm holes, supernovas and the likelihood of life on other planets (to which I couldn't agree more with their opinions). For me, this featurette tops the bunch of what is already an interesting collection of extras.

In another exclusive to the region two release, the 30th Anniversary Moments feature contains a number of interviews with cast members and various guest stars of The Next Generation, Voyager and even (depending on your opinions) real moon walking astronaut Buzz Aldrin. However, they were either not invited, hiding or didn't want to be interviewed but, other than the now late DeForest Kelley, no other cast members from the original series or Deep Space Nine are interviewed.

Finally, where would a DVD be without a Photo Gallery and collection of Trailers for other titles and other tie-ins? Apparently, not very far as we have a number of behind the scene images of the cast and crew plus a trailer come set of interviews for the Deep Space Nine DVD box-sets, Star Trek the Next Generation box-sets and something called Borg Invasion 4D. I have no idea what this is, so it's either a rather good looking computer game or theme park ride situated somewhere in America.

Star Trek creator Gene Roddenberry was way ahead of his time, not only in the creation of various technologies which today's scientists are already working on, but in the make up of his crew of the Starship Enterprise. After all, in 1966 a television series containing a multi-racial cast was unheard of. This leads us onto Star Trek Voyager and another Roddenberry inspired series which continues to break the mould. Not only does the multi-racial cast continue, with a black Vulcan and American Indian officer, but the captain is a woman. Now this could raise a male chauvinistic titter about problems with reversing and scratching the side of the starship, but as legions as fans will tell you, the cast gel together perfectly and with some clever script writing even come close to shading the antics of Star Trek : The Next Generation.

Week in week out the plots come thick and fast and, unlike the rather East Enders plodding style of Deep Space Nine, each episode manages to keep you entertained throughout the season. Sure, as with most long running series there are weak ones, but on the whole series three continues to excel with some cracking episodes, especially the season finale Scorpion, Part I where Voyager meets the Borg-destroying Species 8472 and, horrors of horrors, a collaboration with the Borg.

If there is to be any criticism of the Voyager season box-sets then it has to be the price. However, if you look at what you get for your money then it doesn't seem so bad - after all, it's wonderfully presented in a stylish box-set and you do get over 19 hours of entertainment. Even so, charging the RRP of £84.99 is a little optimistic, but go shopping on line and you can save yourself a bundle of notes and get a cracking science fiction series with a whole host of interesting extras. Stroll on season four.