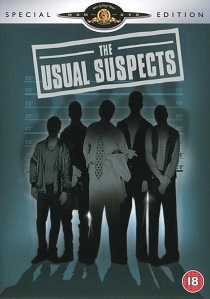 Roger Kint and four other criminals are hauled in by the police and placed in a line up. This is nothing unusual for these career criminals, but it soon becomes apparent that this is no ordinary line-up and a greater power is at work. Roger Kint is called in for an interview with the police and starts to tell a tale about an all powerful mobster and just why everyone is terrified of him.

Told in flashback, he describes how his gang becomes involved in a plot to steal a large shipment of cocaine as payback for the mythical and terrifying Keyser Söze. Just who is this mysterious Keyser Söze? And without giving away too much of the plot and spoiling it for everyone, I can't really tell you much else - you'll just have to find out for yourself.

The picture is bright and colourful throughout with a high bit-rate and plenty of detail, especially during the dark and gloomy interior and night time scenes. However, the picture does suffer from the occasional dust scratch, although it is certainly not too much of a distraction as you're spending most of the time using the old grey matter upstairs to keep up with what is going on.

With the film being dialogue based there isn't much call for the use of the surround channels. However, during the flashback scenes the surround channels are used effectively by gunfire and explosions. The dialogue is clear and precise in the centre channel without any bleeding to the other channels and there was never any need to correct the volume.

The menus are nicely animated and scored in a manner not too dissimilar to Se7en. It's all quite effective, although the menu selections are hardly what I'd call intuitive. Whereas the initial release contained no extras whatsoever, this special edition has a bountiful selection that will keep fans of the film more than happy, and occupied, for some time.

Although the main disc only contains two Audio Commentary tracks the amount of available space has been greatly reduced by the inclusion of a French 5.1 soundtrack thus causing the main extras to appear on their very own disc. And what a plentiful collection of extras they are. However, a word of warning. If you've never seen the film before then leave the extras until after you've watched the film.

If you already own a copy of the initial Polygram release then you're probably already fan of this modern noir masterpiece. You should still consider adding this much better MGM effort to your collection and using the initial release as a beer mat. You can then sit back and enjoy the extra material and groan when you learn so much that you missed. Priceless.