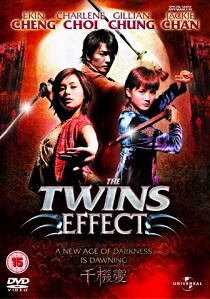 Reeve and Lila are vampire hunters and form part of a secret organisation which is sent to rid the world of these troublesome pests. They are currently involved in a brutal battle with Duke Dekotes, the leader of a new order of European vampires, who has recently returned to Hong Kong. Dekotes is on a mission to collect the blood of five royal vampires which will then enable him to walk in daylight and rule the world. Naturally, he's fully focused on the mission at hand and nothing is going to stand in his way.

So when Reeve and Lila's latest encounter with Duke Dekotes and his cohorts ends in tragedy, a devastated Reeve pledges never to fall for his partner again. But with the arrival of his new and beautiful partner Gypsy, who has idolised him for many years, Reeve is thrown into yet more turmoil as there is an instant attraction is apparent. Matters aren't improved much by the fact that Reeve's sister, Helen, is less than impressed with Gypsy and it doesn't take long a fight to break out between the pair that even Reeve has trouble bringing under control.

After being dumped by her boyfriend in a restaurant, Helen is soon on the rebound when she meets and falls for Kazaf. Trouble is, and unknown to Helen, Kazaf is a newly arrived vampire prince trying to avoid Duke Dekotes attentions. But Kazaf is a different form of vampire and he has nothing but contempt for the "old" vampires brutal blood sucking methods. He would rather die than suck blood from humans, preferring a nice full bodied bottle of blood to accompany his evening meal. But as a vampire prince, Kazaf has even greater worries than those pesky vampire hunters as Duke Dekotes only needs his blood in order to complete his mission.

A higher than normal budget for The Twins Effect has resulted in a stunning picture and transfer that most HK films can only dream of. Colours are rich and powerful with a high level of detail and whilst most of the film takes place either at night or in dark locations, grain and artifacting is kept to a minimum. However, during some of the day time and wider angled scenes grain can be a bit of an issue as well as highlighting the occasional problem with print damage. Still, this is far, far better than many other HK films I've seen on DVD and I hope this a sign that quality and not quantity is finally heading eastwards.

Originating from Hong Kong it will come as no surprise to learn that the 448 Kbps Dolby Digital soundtrack is in Cantonese. As a result, or unless you understand Cantonese, the majority of your attention will be directed to the all important English subtitles. This is a bit of a shame really as you'll most likely miss out on what is a rather good and involving soundtrack. The surround channels are kept busy during the action scenes with a good balance between the musical score and ambient effects, whilst the dialogue is crisp and clear in the centre channel with some good stereo steerage at the front.

The only criticisms I would have to make is that the native region three edition comes equipped with, and no doubt far superior, DTS soundtrack. Why is this not supplied here? And for a film which appears to be aiming for international appeal, why no dubbed soundtrack (even if some dubbed soundtracks can look and sound terrible)? Ok, so there's an awful lot of Cantonese speakers out there, but if your film is to make any serious money you really do need to crack that fickle English speaking audience. Trouble is, if isn't in English then you're only ever going to appeal to a small niche market.

The menu system is pleasantly scored (with a very Danny Elfman sounding score) and animated with cut scenes from the film whilst there's some nice transition effects to the sub menus. Extras wise, things are reasonable enough with interviews with the cast and crew plus a behind the scenes featurette.

The Making Of featurette, running at just over 15 minutes, is interesting enough and has clearly been made for an American/European audience with a number of interviews conducted in English. However, rather unsurprisingly, it's Hong Kong origins are clear from the opening credits with plenty of Chinese text, film clips with Cantonese dialogue and interviews with other cast members in Cantonese.

Although the content is interesting enough, with the usual praise for the director and other cast members, the interviews with Jackie Chan and director Donnie Yen are of greatest interest, whilst the biggest revelation in the featurette is that Jackie Chan sings the theme tune (well it impressed me!). Trouble is, with all of the swapping between English and Cantonese with subtitles, it can all get a tad confusing. I think I would have been happier with the whole lot in Cantonese with English subtitles.

Next up are the Interviews with the Cast and Crew. The six interviews can be selected individually from a menu and consist of chats with Jackie Chan (English), Gillian Chung (Cantonese), Charlene Choi (Cantonese), Josie Ho (English), Edison Chen (English) and director Donnie Yen (English). They are all of varying length, and quality, but the 15 minute chat with Jackie Chan and his opinions of the Hong Kong film industry is the best of the bunch. However, plenty of clips from these interviews also appear in the Making of featurette.

Things are rounded of with Four Trailers. Yet again, the Hong Kong film industry shows Hollywood just how to go about making an attention grabbing trailer with two excellent theatrical trailers and two teasers for the international and Asian markets.

Whilst there's no doubt that The Twins Effect has the ever so slightest hint of Blade about it the Hong Kong film industry easily beats Hollywood in both the originality and actions stakes. The industry also prides itself on its amazing stunt work whilst resisting the ever growing temptation to use CGI effects (mainly due to budget restraints). But having been given a much higher budget than most other HK films of late, The Twins Effect does give into the lure of CGI effects - even if some of those effects are better than others. Fortunately, the stunt work remains top notch.

However, unlike Hollywood and its continual obsession with special effects and lack of storylines, The Twins Effect excels simply by the fact that it has refrained from over using the CGI effects whilst concentrating with the on screen action. As a result, this is a cracking action film with all the usual comedy moments that defines a Hong Kong film along with plenty of dazzling stunts and jaw dropping visuals.

After viewing the film it is quite easy to see just why The Twins Effect was the highest grossing Hong Kong film in the summer of 2003. It even won awards for best editing, best art direction, best costume and make-up, best action design, best sound effects and best visual effect at the 23rd Annual Hong Kong Film Awards. And if that failed to impress you then it also won awards for the best action design and best visual effects at the 40th Annual Golden Horse Awards. An impressive haul indeed.

If you enjoyed Buffy the Vampire Slayer or Angel then you're sure to enjoy The Twins Effect. If you ever needed an excuse to examine the phenomenal Hong Kong film industry then you're never going to a have a better, or easier, opportunity to enjoy an action film which Hollywood so desperately lacks. Think of it as Buffy the Vampire Slayer goes East and you're on the right track.

3D-BD
In Incredibles 2, released on DVD, Blu-ray and 3D Blu-ray on 12th November 2018 from Walt Disney Home Entertainment, Helen is called on to lead a campaign to bring Supers back, while Bob navigates the ... END_OF_DOCUMENT_TOKEN_TO_BE_REPLACED
Latest ReviewsView