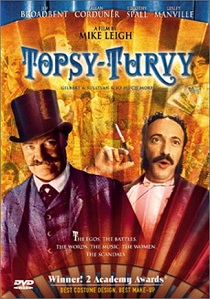 We begin in the theatre with Sullivan leaving his sick-bed to conduct the first night of 'Princess Ida'. The Victorian theatre-goers are all in their best evening dress: a tradition that is still practised by some even today. From here, we are taken home with both Gilbert and Sullivan to meet Gilbert's (long-suffering) wife, Kitty, and Sullivan's mistress, Mrs. Ronalds.

Princess Ida is not doing as well as expected, and for his health, Sullivan now takes off for the Continent. Here we see him sampling the delights of a French brothel, while Gilbert works on the next libretto. Gilbert is frustrated when Sulivan finally returns from his trip, as Sullivan does not care for his libretto. They quarrel and, although under contract to supply a new operetta, Gilbert offers to allow Sullivan to write a more 'serious' work with some other librettist. In the meantime, Gilbert's wife, Kitty, has seen a couple of Japanese ladies from an exhibition in London, and she persuades Gilbert to attend. This exhibition provides the means to break the deadlock with Sullivan, and 'The Mikado' is born.

We are now shown an insight into the writing and production of this work, including the chorus' revolt at the Mikado's only solo number being cut at the dress rehearsal. Needless to say, the song is reinstated. The finale of the film is rather poignant, showing the unhappy 'leading lady' having to put her personal troubles behind her to go on stage.

Looking at the film from a technical point of view, the picture is very clear, with imaginative use of camera angles throughout. The sound is crisp, with good use of the rear channels, primarily for giving ambience in the theatre settings, although this is not their only function.

The actors show quite considerable musical skill. Alan Corduner (Sullivan) is shown playing the piano with some skill, and conducting the orchestra too. All the main characters from the Opera Company do all of their own singing. There are some fabulous scenes from 'The Sorcerer' and 'The Mikado' where all the members of the chorus are excellent musicians in their own right. The ambience of the 'first night' theatre audiences is captured superbly in both the costumes (for which the film won one of its Oscars) and in the use of the surround channels to bring the theatre into your living-room.

The characters are played well, with Jim Broadbent portraying a very 'disagreeable' Gilbert, and Allan Corduner a very cosmopolitan Sullivan. The scene with him in the French brothel is quite bizarre! The other principal characters are excellently portrayed, in particular Wendy Nottingham as Helen Lenoir.

With the rather "bitty" extras it seems to me that, for once, the R2 buyers have the better disc here with an interesting director's commentary. Maybe not surprising, as it is a British film, with a particularly British subject. Die-hard Gilbert & Sullivan fans will lap up the whole two-and-a-half hour spectacle. Even those new to operetta will enjoy the unfolding drama. If you are at all interested in musical theatre and its history, I say this film is a 'must'.