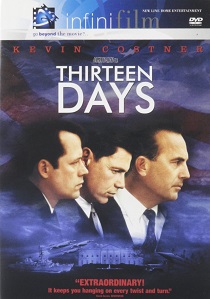 In October 1962 an American U2 spy aircraft captured images of Russian nuclear missiles being assembled on Cuba. With America now threatened with short range weapons the balance of power was shifting back to the Kremlin. With the military screaming for a military solution, with its unthinkable consequences, it was down to the cool head of President John F. Kennedy to bring the world back from the brink of a nuclear holocaust.

For thirteen days the Kennedy administration battled with the bureaucrats and the military to find a solution to the escalating crisis. With the military option ruled out for the time being, Kennedy sets up a quarantine around Cuba with orders for the Navy to stop and search any ship travelling to Cuba. With no signs of the Russian ships stopping the White Houses draws up plans for the invasion of Cuba, until an intriguing telegram is received from the Kremlin.

The picture is bright and colourful with an above average bit-rate throughout the film. It appears to have been slightly bleached to give it a more historical and realistic feel and to some degree it pulls it off well. There are no signs of pixelisation or artifacting, although the bright picture could sometimes exhibit signs of outlining around the various cast members. This certainly seemed to be a problem during the White House indoor scenes and could be a little distracting at times.

With the film being mainly dialogue based there wasn't too much activity in the surround channels. However, whenever the events took us to Cuba or the various American Navy ships, the surround channels burst into life with plenty of ambient effects. The rear channels, and sub-woofer, were also put to good use during the scenes containing aircraft.

The extras are also excellent, with some superb background material and documentaries on the events leading up to the crisis and beyond. There's even some unique on-screen prompting called "InfiniFilm". By enabling this feature from the set-up menu, at various points during the film you are prompted with an option of viewing additional information. This can either be on the historical events or the actually filming process. Selecting an item from the displayed menu will take to the relevant section in the extras and then once completed the film will carry on from where it left off. This feature is not unique as "Bring it On" also employed a similar method, albeit not a detailed as this. However, it could become a little annoying after a while as there didn't appear to be an easy way of disabling the feature.

This film is superb, although I'm not sure why Kevin Costner should be trumpeted as the major film star when all is does is put on some dodgy accent and more screen time by trying to look like a father. Once Bruce Greenwood, who plays Kennedy, is on screen he is far more commanding than Costner. As someone who was born after the Cuban missile crisis, it shows just how close the world came to war. Along with the excellent documentary pieces it is an interesting, and frightening, insight to the cold war, made even more so by the interesting Infinifilm feature. Just when you thought the crisis was over, it takes a turn for the worse.

What makes this film even more compelling is that it is based on actual events and not some mumbo-jumbo Hollywood script. Was John F. Kennedy Americas greatest president? Unfortunately we'll never know and the various conspiracies surrounding his death continue to this day, with many more questions than answers. This film is truly gripping stuff. Highly recommended, even more so if you are under 40 years old.