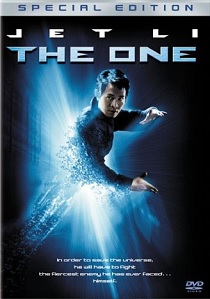 There is not one universe but a multitude of parallel universes called a multiverse, with each universe containing the same person but with a different role in life. One of these universes has discovered how to cross from one universe to another via wormholes.

This technology could have dangerous consequences for the fabric of multiverse so it is carefully and heavy guarded by the Multiverse Agency. Gabriel Yulaw, a former guard at the MVA, has turned into a renegade and is travelling between the various parallel universes in order to kill all versions of himself. He has discovered that by killing a version of himself in one universe the life force is dispersed equally between the surviving individuals in the remaining universes and thus increases their powers and abilities.

Naturally, the MVA don't want Yulaw to succeed so he is perused from one universe to another to prevent the murders taking place. Unfortunately, they are running out of universes and with only one universe left to visit they must stop him before Yulaw completes his task and becomes "the one". However, Yulaw hadn't banked on his last version, police officer Gabe Law, from being such a pushover. As the life force is now equally divided between the pair he's got a real fight on his hands.

The picture is rich and vibrant with superb amounts of detail and no signs of any picture imperfections. Although the bit rate is only average throughout the film, the many dark scenes are handled brilliantly without any hints of outlining or pixelisation. Together with the near perfectly blended CGI effects you couldn't really ask for much more from an action film. Even the fickle viewer is catered for with the disc offering both a fullscreen and widescreen version of the film.

The surround channels are well used throughout the film and whenever characters travel through wormholes to other universes there is an abundance of effects whizzing around the soundstage. There's plenty of LFE's to keep the action fans happy and the stereo steerage in the front channels is also impressive. However, the dialogue is a little poor and at times it's quite hard to pick up what Li is saying. Mind you, a few years back he could hardly speak a word of English so he can be forgiven. After all, I can't speak a word of Mandarin or Cantonese so I have little room for complaint.

The menus are cleverly animated and scored with a first-rate introduction to the film giving a hint of the special effects to come. Once the introductions are over the menu is displayed along with cut scenes from the film around the available menu options.

The extras include the usual Theatrical Trailer, a Director's Commentary and three interesting making of Featurettes. These include how the special effects were created, the martial arts training and the usual pat on the back interviews with the cast and crew. All in all it's a good set of extras that adds value to an otherwise disappointing disc. It is only in the last ten minutes that we finally get to see Jet Li really show off his martial art skills. Up until then it is just a show of fancy CGI graphics that looks like a cross between Highlander and The Matrix.

The power of a big Hollywood budget really does show the gap between East and West with some exceedingly impressive visuals. However, a really suspect script is just as easily transported across the pacific as the talents of their martial arts experts. Never the less, I can't fault the film for its glorious visuals and the final jaw dropping fight scene which shows Li at his best.

However, if you want a decent action film then I suggest you dust off your copy of The Matrix and give that a spin. If you really like Jet Li and want to see him kick some butt for longer than ten minutes then I suggest you watch the far better Kiss of the Dragon. This one is really only recommendable for the die hard Jet Li fans.