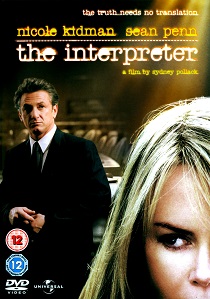 When African-born U.N. interpreter Silvia Broome inadvertently overhears a death threat against President Zuwanie of Matobo who is scheduled to address the U.N. General Assembly in the coming weeks, she immediately reports the incident to security. Although her information is taken seriously and two special agents are brought into investigate the claims, one agent in particular, Special Agent Tobin Keller, is having a great deal of trouble believing her story. As a result, he decides to investigate her background and when some interesting information about her past turns up, Keller suspects that her reasons behind her claims may be somewhat suspect.

Realising that she has now become a target of the assassins, Silvia is still having a great deal of trouble convincing people that she is in just as much danger as President Zuwanie. So with nothing to loose, she decides to begin her own investigations. But without her knowledge, and puzzled by her dark secrets, Special Agent Tobin Keller decides to assign Silvia some protection and his agents begin to shadow her every move. But with her actions raising even more questions than answers, can Tobin get to the bottom of his investigation before it's too late?

The picture is bright and colorful with a high level of detail and good levels of contrast throughout. Both the indoor and outdoor scenes looked near perfect whilst black levels, especially within the darkened confines of the UN buildings, were solid with no problems with either artifacting or outlining. Again, with the film being such a recent theatrical release, the print is in pristine condition with no signs of either dust scratching or other forms of picture imperfections. Whilst the film benefits from such a clear transfer, it is the actual interior of the UN building which impresses the most. Having spent most of my life seeing rather grainy and NTSC sourced material on the BBC and ITV news channels, the film becomes a showcase for the startling interiors and architecture of the various UN debating chambers.

Unlike the picture, the 448 Kbps Dolby Digital 5.1 soundtrack is a little disappointing with a rather uninspiring mix. Although the opening five minutes offer so much promise, with the surround channels offering some rather eerie music and ambient effects, everything ends up being heavily biased towards the centre channel. Oddly enough, even the heavier parts of the musical score found themselves in there whilst the front stereo channels were surprisingly idle. Still, given that the subject matter didn't really call for a particularly dynamic soundtrack, the all important dialogue manages to remain firmly locked in a crystal clear in centre channel. The surround channels are used to some degree, with the occasional ambient effect and use by the musical score, but as with the LFE channel, they are all rather underused.

After a choice of languages has been made and the now customary anti-piracy video endured, the main menu is displayed. Although there is a nice animated introduction with numerous cut scenes from the film played in the background, once it has completed once cycle the menu becomes static but scored. After The sub-menus are also static, but scored in the same haunting music. However, just remember, given that this is a Universal release, dwell on a menu too long and it will eventually timeout and start playing the film. Extras wise, things are very interesting indeed with an audio commentary (and optional subtitled track) from the director and a number of interesting featurettes.

The main extra on the disc is the Audio Commentary from Director Pollack. Although there are plenty of gaps in the commentary as Pollack watches the film, it is ultimately a very rewarding listen with plenty of information on the production and those amazing scenes at the U.N. However, interesting as his comments are, so much more useful information can be obtained by watching the various featurettes.

The first of those is the eight minute The Ultimate Movie Set : The United Nations featurette. The featurette contains a number of interviews with the crew as they look at filming within the U.N building as well as Pollack's eventual successful attempt at getting UN Secretary General Kofi Annan to allow them to film in the debating chambers. It's all rather interesting stuff. Next up is the eight minute A Day in the Life of Real Interpreters featurette. Interviewing real life interpreters, we are taken on a tour around the booths overlooking the general assembly whilst Kidman and Pollack are also on hand to praise the work of the interpreter as well as providing some additional background information to the film. This includes such gems as the invention of a fictitious African language which Kidman had to learn (definitely sounds like a bit of an overkill to me).

The ten minute Sydney Pollack at Work - From Concept to Cutting Room featurette is an interview with our man Pollack who goes on to talk us through his early, and failed, years in acting school right up to his directing work. He then goes on to discuss the huge array of problems which beset a director as a film is prepared for release. To be honest, I thought a director had a bit of a cushy number, but this interesting and detail interview manages to dismiss this idea. Although rather pointless, the five minute Interpreting Pan & Scan vs. Widescreen featurette is probably the most interesting extra on the disc as Sydney Pollack demonises the process of panning and scanning and the destruction of the director's original vision.

The three minute Alternative Ending is an inferior end to the film, however, with no commentary or introduction from the director it is hard to decide whether this ending was a new or the original. The three Deleted Scenes are of some interest with a bit more information revealed about Tobin Keller's wife as well a bit more from the "bad guys". On the whole, these cuts were the correct decision as they gave away far too much of the plot (so make sure you watch after viewing the film). Things are rounded off with a bit of filler material in the way of Theatrical Trailers for The Bourne Identity and Pride and Prejudice. Oddly enough, there is no room for the trailer for The Interpreter.

With British television channels dropping shows and films at the slightest hint of an association with either a disaster or terrorist event, given the recent terrorist atrocities of 7th July 2005, I'm surprised that The Interpreter, and one scene in particular, is due for release so close to these events. Still, we've always got our "stiff upper lip" and it would be stupid to allow such events to dictate the release of a film or DVD, even if the cover artwork has been changed. Never-the-less, it's still brave decision for Universal to continue with the release of this film.

Whilst Kidman has been rather busy of late, with films such as The Stepford Wives and Cold Mountain under her belt, her role in The Interpreter just doesn't feel that convincing, plus she doesn't even look her usual attractive self (although, to be fair, the part didn't really call for her to bat her eyelids too much). As for the film, it's a bit of mixed bag really and, just like the UN itself, it ultimately fails to thrill or deliver the goods. The teaming of Sean Penn and Nicole Kidman was also a bad one and the long winded political nature of the film ensured it dragged on a little too long for my taste. Never-the-less, the film is saved somewhat by the wonders of director Sydney Pollack and the fact that the filmmaker was able to gain unparalleled access, with some startling results, to the U.N building in New York.

Although the extras add some much needed value to the package, as a political thriller I was ultimately disappointed in a film which offered nothing new to the thriller genre. Still, I suspect that fans of the genre will still want to investigate this title, even if it's just a rental. Unfortunately, I have this gut feeling that this title will quickly end up in the sale section of your local HMV.