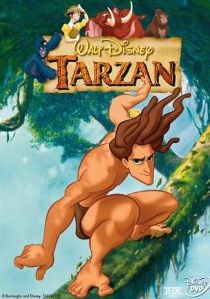 ReviewAnimation
Review Article Go back to homepage
Animated version of Edgar Rice Burrough's classic story of the ape man, Tarzan, done in the way many have tried to copied, but only Disney can pull off which is surely to become another Disney classic.
Tony Goldwyn, Minnie Driver, Glenn Close, Rosie O'Donnell, Brian Blessed, Nigel Hawthorne, Lance Henriksen, Wayne Knight
Animation
1
1 Hour 28 Minutes
Thank you for supporting DVD365.net when you order using the link(s) below.
Buy DVD
Story

Raised by a family of gorillas after his parents are killed in an animal attack, Tarzan develops the instincts of the jungle and the animals which inhibit it. However, when he meets some of his own kind, including the beautiful Jane, he is torn between his world and the curiosity of mankind. As usual, the films main bad guy is British. Why do the Americans always persist in choosing the British as the baddies? Are they trying to tell us something?

The film consists of the usual Disney line-up. A catchy soundtrack, by Phil Collins, wisecracking side-kicks, a damsel in distress, and a mixture of stunning computer animation along side the classic. There is one clever moment in the film with a reminder another Disney film. When the young gorillas come across the encampment you may notice that all the cups and saucers are the same design as the characters in Beauty and the beast. A nice touch.

The picture and sound is a delight to behold and will undoubtedly be used across the country as a demonstration disc in many a store. However, there are rumours of an audio problem with this disc. Apparently, some pressings of the disc are in Dolby Digital 5.0, as my copy is labeled, with the front left and rear left surround tracks matrixed together. There are rumours that other pressings are the full 5.1, but these are unconfirmed. Disney are apparently not issuing a full recall since, allegedly, they think most people won't notice the difference. Well, on my DD set-up I certainly didn't.

One thing I did find extremely annoying, unless there is a way to circumnavigate it, is the fact the start-up copyright message takes an age to finish and then we are subjected to various Disney trailers which, again, disc operations are prohibited. OK, you can advance the tracks to get to the static menu, but there is one bonus with these trailers. We are teased with the Toy Story 2 trailer.