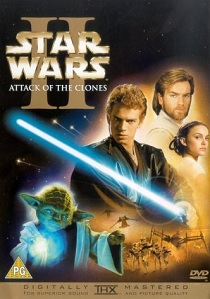 A lot has changed since The Phantom Menace and many star systems are becoming restless with the Republic. Several thousand systems have now declared their intent to leave the Republic and join the separatist movement ruled by the mysterious Count Dooku. With all this disruption and confusion within the Republic senate the Jedi knights are finding more and more difficult maintaining the peace and order in the galaxy. Are the days of Republic numbered?

Anakin Skywalker has grown up and is now Obi-Wan Kenobi's padawan learner. Anakin is certainly impressing the Jedi council and with his remarkable skills he could become their best ever Jedi knight, after Yoda naturally. However, his temper is quick, he is arrogant and has issues with authority. He is also troubled with constant nightmares about his mother. With anger controlling most of his emotions there are many implications for his Jedi skills and the dangers of the dark side. We'll need to keep an eye on this young Jedi padawan as he could cause many problems in the future.

Padmé Amidala's term as queen has come to an end and she has continued her dedication to the people of Naboo by becoming a Galactic Senator. She is returning to Courisant and the senate in order to vote on the extremely important issue of forming an army for the Republic. With a modern and mighty army in place the Republic would then be able to assist with the overwhelmed Jedi and put down this uprising for good.

However, her loyalist stance makes her a target for separatists terrorist attacks and upon arrival on Courisant they make their feelings known with an attempt on her life. Fortunately, she survives the attack unscathed but her body double is less fortunate. So for the remainder of her stay on Courisant, Obi-Wan and Anakin are assigned to her protection. When yet another terrorist attempt on her life is thwarted the Jedi council sends Obi-Wan on a mission to investigate a mysterious threat to the republic whilst Anakin takes Padmé back to Naboo. With a lot more time alone with Padmé, Anakin's long felt feelings for her soon emerge.

As the film was filmed onto digital media, the DVD has been created directly from the clean and pristine digital source with no signs of the picture imperfections that can blight ordinary print. As a result the picture quality is immaculately sharp with the big CGI landscapes looking just wonderful. However, the picture quality is a little too good and the many mixed CGI and real life scenes become a little too obvious to the eye. This is no fault of the encoding process, but just down to the shear fact that just so much of the scenery is entirely CGI generated. Mind you, this issue could not be aimed at the space battles and planet approaches. They are simply breathtaking.

George Lucas's self confessed style of film-making is to film components of the film separately. Each character will film a scene, usually on green screen, George will deal with how that character acts before finally adding the CGI background and characters. As a result it is extremely rare to find a scene where both the set and characters are all filmed at once. This gives him a huge scope to produce an edit which meet his visions. Even in the scenes where several characters have been filmed together he still manages to edit them out and then reassemble them to make a completely different scene. This also gives him plenty of opportunities for near unlimited special editions of the film.

All this lends itself to a film where everything is where George wants it to be but ultimately ends up feeling too fake. Character interaction is limited, as they are mostly interacting with CGI characters so performances can seem remote and unfeeling. The CGI where used properly is superb, the initial decent of Padmé's flyer into Courisant looks wonderful (especially with the lack of advertising hoardings plastered with adverts for intergalactic Cola-Cola), and so do the final battles. But where characters interact on what are meant to be the more emotional scenes, the CGI around them looks far too obvious and on a high quality TV frankly ruins the scene.

The sound on offer here is totally awesome with a crisp, clear and involving soundtrack from start to finish. You certainly know that you're going to be in a treat when the initial THX fanfare rattles the light fittings and sends the cat diving for cover. The stereo steerage at the front is superb whilst the dialogue remains clear and precise in the centre channel without any bleeding to the other channels.

The many action packed battles reverberate around the room with near continuous and excellent use of the surround channels and ground shaking LFE's - just listen to the chase scene in the asteroid field for the ultimate LFE demonstration! And where would a Star Wars film be without an all encompassing John Williams soundtrack? With this awesome and, essentially, near perfect delivery of audio, I was left wondering just what a more spatial DTS-ES soundtrack could deliver.

If you ever needed an excuse to ask the wife, or husband!, to allow you to upgrade to a full blown 5.1 system then this is the film to demonstrate. Find a baby sitter, get the neighbours to feed the pet and head on down to your local A/V store. With prices dropping on a near day to day basis you could even be directed to that shelf glistening with EX equipment. There's never been a better time to invest in home cinema, and with soundtracks like this they'll be the equipment to own in 2003.

Similar to the equally extras laden The Phantom Menace, this release is spread over two packed discs. Both discs contain impressively animated and scored menus which, yet again, show the world just how a DVD menu should be designed and implemented. I think I must have spent nearly an hour just exploring the menus and, oddly enough, cooing over their design. When it comes to menu design and layout, they don't come much better than this.

Whilst the first disc contains the main film the only extra to be found is the audio commentary with George Lucas and company. Unfortunately, it all gets a little boring as the Lucas monotone voice soon becoming rather annoying. The main meat of the extras can be found on the second disc with plenty of trailers, deleted scenes, galleries and documentaries. The documentary on the pre-visualisation techniques is certainly worth a look as it reveals quite a few interesting facts about how the film was planned. In fact, most of the film making process is reviewed and sheds much light on how George Lucas is embracing new technology to make his films.

Other than showing off some superb CGI effects, the main purpose of the film is to show the start of Anakin's decent to the dark side, his relationship with Padmé and the start of the Clone Wars. These are all explained satisfactorily, albeit slowly, unlike the implausible Episode I. So plot wise the film is OK, but not great. It definitely leaves a lot to be covered by Episode III and rises the distinct possibly of a three hour epic to rival Lord of the Rings.

The acting at times can be quite poor with Natalie Portman and Hayden Christensen making the more romantic scenes wooden and totally without depth. The character that portrays the most emotion at times is Yoda and, boy, when he gets worked up about something he certainly has a few tricks up sleeve! As usual, Ewan McGregor hardly breaks into a sweat and still makes a good Obi-Wan playing his characters traits well. It's definitely a vast improvement on the rather bored looking character in Episode I.

The battle scenes look great and are indeed the panicle moments in the film. The large Jedi battle and the beginning of open warfare are brilliant and are probably why we bought the disc in the first place. There's no way that all of this could have been done using the miniature models and stop go animation seen in the first three Star Wars films. It's no wonder George Lucas released Episode IV first, he took the easy route out!

If you were to dissect and examine the film you could come up with hundreds of legitimate criticisms about the film, especially with the some of the cringe worthy dialogue and the fact that Padmé doesn't seem to have aged a day whist Anakin is totally different. Perhaps Naboo has something in its water? Never the less, the film certainly contains the Star Wars magic and is still very enjoyable too watch. Oh, just in case the annoying Ja Ja Binks was putting you off, thankfully he doesn't appear for too long.

Needless to say, this disc is a must purchase and will no doubt warrant repeat viewings for many years to come. As Yoda would say, "A disc a winner this is".