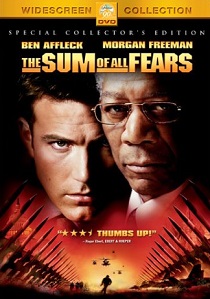 When the Russian president suddenly dies of a heart attack a virtual unknown succeeds him and immediately informs the Americans to stop interfering in Chechnya. This change of policy causes mayhem in the Whitehouse so a young analyst named Jack Ryan is called in to give an insight into the new leader. Although Ryan informs the top brass that President Zorkin is not a war maker, they are far from impressed when a vicious gas attack is made by Russian troops in Chechnya.

This sinister development is the perfect ploy by a group of terrorists, whom unbeknown to Russia and America, plan to provoke the two superpowers into starting a devastating war. Neo-Nazi terrorists have acquired a nuclear device and smuggled it into America in a vending machine. It has been installed at a football ground with the intention of exploding the device during a game attended by the President. However, Ryan is hot on their trail after discovering what a group of renegade Russian nuclear scientists were creating.

Unfortunately, he is too late to prevent the bombs detonation, but his information proved valuable in preventing the Presidents murder at the hands of the terrorists. When an American aircraft carrier is then attacked in the North Sea the CIA assume that the Russians are behind the attacks and prepare to launch counter strikes. It is up to Ryan to uncover the full truth before the President authorises a full counter offensive.

The picture is bright and colourful with plenty of detail. All types of picture scenarios are handled with ease and there's no signs of artifacting or outlining evident from the average bit-rate. However, there can be a few problems with dust scratches and whiskers. I'm not sure whether it was deliberate, but during the first minutes after the bombs detonation, and the resultant bleached colours, there are large numbers of picture imperfections evident. It's hardly a distraction, but I would have thought that this would no longer be a problem in the digital age.

For an action film there could have been much more use of the effects channel. Never the less, it is still good enough and there's plenty of dramatic explosions to keep the action fan happy. This is evident during the attack on the aircraft carrier and the nuclear bombs detonation and its after effects, although I wonder whether this was toned down slightly to make it less shocking to the viewer. The dialogue is clearly audible throughout and with the volume set at a reasonable level it can be enjoyed without having to keep diving for the volume control.

The menu is dramatically scored and animated with the menu options easily visible and accessible. Although the extras can hardly be classed as plentiful they are still extremely interesting and certainly add value to an already impressive film. The Making Of documentary has all of the stars and the director commenting on each other and it offers an interesting insight into the films production. Although some of the interviews appear to be straight from the films initial promotional material, it is still fascinating to watch and lasts for around eight fact packed minutes.

The Second Documentary on the Special Effects also offers an in-depth and interesting look at the creation and subtle use of the CGI effects. There's also a look at the many models used in the film with a detailed look at the aircraft carrier being blown up in a pyrotechnic extravaganza. There's also two Audio Commentaries and its all rounded off by the Theatrical Trailer.

If you sit back an digest what you've just watched then you'll begin to realise just what probably goes on without our knowledge. All these high up government officials around the world are playing with with the lives of millions of people whilst they wage their private wars with deadly toys. As the making of featurette explains, in today's world it has become even more important to gather all of the facts before you go pointing weapons in one direction or another. Makes you think doesn't it?

This film is a great thriller and after the events of 9/11 it really does make it essential viewing, especially since the producers actually had the courage to release this film. With the introduction of Ben Affleck as Jack Ryan there's so much more scope for differing story lines and I'm sure we've seen the introduction of a new franchise. Well worth investigating.