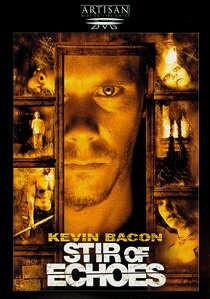 Tom Witzky's life changes during a Chicago neighbourhood party when his sister-in-law hypnotises him and plants the words 'open your mind' in his head. That night he starts to see flashbacks of violence and sees the ghost of a young woman called Samantha. Unknown to him, his son Jake is also a "receiver" but whilst his son treats Samantha as a friend, Tom becomes confused and agitated by his visions.

Becoming obsessed with these images, which are starting to come true, he puts himself in mortal danger and alienates himself from his friends and family as he attempts to solve the mystery. Unable to comprehend why the manifestation has singled him out, Tom eventually becomes convinced it is trying to tell him something. He soon uncovers something in his own home that could destroy his marriage, his life and the entire neighbourhood where he lives.

The picture is first-rate with a high bit-rate rate throughout the film. There is no artifacting or outlining with the many dark scenes in the film handled superbly. The sound quality is good with the surround channels well used with plenty of head turning eerie sounds. The front soundstage is also impressive, with good channel steerage and no bleeding from the centre channel.

The animated menu sequence is quite remarkable and has a distinct Se7en and Bone Collector feel to it. There's even a good selection of useful extras.

Based on a 1958 novel by Richard Matheson, this is a psychological thriller along the lines of the Sixth Sense but is much better. How his film was overlooked at the cinema amazes me as it has more suspense, more scares and although far more predictable, has a better surprise ending. I even felt that the young Zachary David Cope, who plays Jake, was just as good as Haley Joel Osment and he didn't half remind me of the young giggling boy in Close Encounters