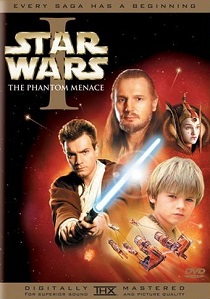 With the conflict brewing between the powerful Trade Federation and the peaceful planet of Naboo, the Federation is blockading the planet. Jedi Master Qui-Gon Jinn, and his apprentice Obi-Wan Kenobi, travel to Naboo in an attempt to confront the Federation and prevent war breaking out. However, the negotiations don't go to plan and they head for the planet to warn the Queen of the impending invasion and the more sinister reasons behind it.

The Jedi manage to evacuate the Queen and her court, but their spacecraft suffers damage during the escape and they must find somewhere to land and make repairs to the ship. They travel to the desert planet of Tatooine where they meet a young slave boy called Anakin Skywalker. Qui-Gon senses that there is something special about this boy and is sure that fate has led him to him.

With the Naboo rescued from the planet the Trade Federation is unable to force her to sign an agreement making the invasion legal. The sinister leader behind the blockade and invasion plot decides to send one of his Jedi warriors, Darth Maul, to hunt down the ship and force the queen to sign the agreement.

The picture is unbelievably sharp with some fantastic colour tones and details and no doubt down to the fact that the film was filmed and stored digitally. There is not a picture blemish or hint of pixelisation in sight. However, although it is good, it is still not perfect. The fact that it is so good has caused a number of problems. With the heavy dependency on computer animation it can be all too easy to spot the computers work. Although the space battles and cities scenes are flawless, it is the droid invasion and subsequent invasion of Naboo that is the disappointment. At times you could almost be watching a cut scene on a computer game it is that obvious.

There can also be some hideous amounts of outlining around the characters, again, this becomes more apparent when there is some sort of computer generated animation in the background, and it most likely caused by the actors being shot against a blue screen.

If the picture is somewhat disappointing then the sound makes up for it in a big way. Whereas the 25th anniversary Laserdisc reissues were rather disappointing in the sound department this THX soundtrack is breathtaking and truly demonstration material. Naturally, it is the pod race and space battles where the soundtrack truly comes into its own with a plentiful supply of surround effects and deep rumblings from the sub-woofer. Even people listening on a humble stereo hi-fi or television will be hard pushed not to be impressed.

There was one strange thing that I noticed with the subtitling and I'm not sure whether it was just down to my DVD player. Whenever someone spoke in an alien tongue there were no subtitles on the screen and I didn't have a clue what they were talking about. I was certain that subtitles had been present at the cinema so I checked the available subtitles and eventually found another English subtitle track with the alien translations on them. A deliberate ploy? I'm not sure.

The menus are pleasantly animated and scored, although for some strange reason I was expecting something different. There are plenty of cut scenes in the background of each menu, which makes a change from only having the main menu animated, and I was most impressed with the animated scene selection menu where the Federation Council meeting is recreated.

There are so many extras that they come on their own disc. There's an hour long documentary that is made up from over 600 hours of footage and the complete set of web documentaries that grace the Star Wars website during the films production. The film is also accompanied by an audio commentary from Lucas and other members of the crew, but I soon found myself getting bored with it all, although the visual effects information was rather fascinating.

The most interesting of the impressive set of extras are the seven completed Deleted Scenes in Dolby Digital and Widescreen. These can either be viewed with an introduction from George Lucas or as a complete set. Some of the footage has been restored into the film, although it would be hard to spot if you weren't looking, and you can see why Lucas decided to drop most of it from the film for timing purposes.

However, the fact that these scenes were completed and not added to the film, even as a seamless branching version, I find extremely annoying. Why not let the viewer decide on whether it was a good idea to remove them from the final print? I have my suspicions that a directors cut of the Star Wars film, with these scenes added, can't be too far off. After all, they've managed to reissue the videos every year with some new design or material, why not a special edition DVD?

It was both a pity and a credit to the public that Lucas relented and released the film onto DVD. He was not planning on releasing it until the other episodes had been released and no doubt it would have been in an expensive box-set. The internet was awash with petitions and sites criticising Lucas, but the cynics amongst you may suspect that he was finally pressurised into releasing the film in order to boost the coffers at Fox and the pay the way for the subsequent episodes.

Let's not dwell on the fact that this film has not plot what-so-ever and it leaves wondering just what the hell was going on for the past two hours - it all ends so quick. It is almost as if there was so much information Lucas wanted to fit into the film that he hurriedly, and excitedly, created the film without much thought for the humble viewer.

And lets face it, the pod race was created purely for the computer console market and we can argue until the end of time about Jar Jar Binks. Never-the-less the film is visually stunning and sounds fantastic. Its success was purely on the hype and expectations alone. Let's just hope that the next episode is better than this one as the viewing public may be a little more suspicious next time around. Still, a disc sure the grace all DVD collections the world over.