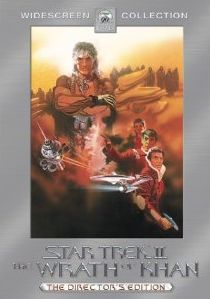 Cadet training officer Captain Spock and his latest troop of trainees are taking out the Enterprise on a standard training mission. The group is to be joined by Admiral James T. Kirk who'll be on quite possibly his last space mission and inspection. Kirk is feeling old and he's missing the old times of charging around the galaxy and saving people and planets from destruction.

Meanwhile, unknown to all but the highest ranks in Star Fleet, scientists aboard Space Station Regula I are preparing for the final testing stage of Project Genesis and the USS Reliant has been assigned to assist. While surveying a planet in the Ceti Alpha star system the Reliant detects faint signs of life on the sixth planet and Commander Chekov and Captain Clark Terrell decide to beam down to investigate.

When the pair come across a set of cargo containers Chekov soon realises that they have stumbled across a nemesis from the past. They have found Khan Noonien Singh and his group of refugees from the Eugenics Wars. They were expelled to the planet by Captain Kirk some years back, but the previously habitable planet has become a barren desert. Khan takes control of the USS Reliant and the Genesis device and vows revenge for his years of exile and the loss of his wife, all of which he blames on Kirk.

The transfer is excellent with a some bright and colourful picture with plenty of detail, although it could be a little grainy at times. It has certainly aged well over the years and even the plastic models and the plentiful pyrotechnic special effects still stand up to most of today's expensive CGI efforts. The film even contains some ground breaking computer animated effects that started a new era of film making.

The only slight problem with the picture would be when there is large amounts of red. Although there is no colour bleeding, at times it certainly looks like it's teetering on the brink of descending into something nasty. Fortunately it doesn't and together with no real signs of either artifacting or outlining it manages to produce a good all round performance.

The sound is reasonable enough, but it's nothing too special with a distinctly unimaginative and dull soundtrack. The surround channels are hardly ever used during the film, but they do burst into life during the battle scenes and the various Enterprise warp speed fly pasts. Again, the front channels are unadventurous, but it the dialogue remains crisp and clear in the centre channel.

Both sets of discs have differing computer animated and scored menus and are excellent in their design and implementation. The first disc is has an animated space station circling the genesis planet whilst the second is down on the living planet. It certainly makes a change from the previously static and silent menus of both the Next Generation and the original films.

The extras themselves are good with a number of surprisingly interesting featurettes on the making of the film and interviews and insights with the various cast members. I'm not really sure why they needed their own disc, but judging by the quality of the picture it was certainly a good move. It allowed the full capacity of the main disc to be used by the picture and soundtrack, and it definitely shows.

Whilst the first film was a box office success it was still quite a bit of a disappointment. Its success at the time was mainly due to a certain Star Wars film and the rage for all things science fiction. However, although Leonard Nimoy had doubts on the films success, the second film is widely accepted by most people as being the best of all the Star Trek films. This director's edition of the film finally gives it the justice it deserves. I'm sure all the Trekies will already own this title, but if you like science fiction films in general you'll probably like this film and it's well worth investigating.