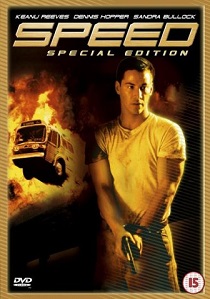 Jack Traven works for the L.A.P.D police bomb disposal force and when he and his unit are called to an office block, where people are stuck in a lift, they are in for a big surprise. Not only is there a ransom being demanded but there is a cleverly wired bomb attached to the lift that even manages to impress the level headed Jack with its design. With the ransom deadline running, out Jack needs to think fast in order to prevent the passengers plummeting to their death. Fortunately, a handy window cleaning boom comes to the lifts occupants rescue and the extortionists plot is thwarted.

Jack and his partner, Harold Temple, suspect that the extortionist is in the building and manage to corner him in a service elevator. However, he detonates a bomb sending the pair flying whilst making his escape. Suspecting he is dead the police pack up and the pair receive an award for their bravery. When a bus explodes and the same extortionist rings a phone booth near to Jack, he soon realises that the extortionist is far from dead and he's out for revenge - and he still wants his money.

His latest ploy has been to rig a bus with explosives that will detonate once the bus drops below 50 miles an hour. Trouble is, Jack has only a short time before the bus reaches the freeway and increases its speed to enable the bomb. Jack is soon in hot pursuit of the bus but it is too late, the bus has exceeded 50 miles an hour and the bomb has been primed. There's nothing for it, Jack must board the bus and attempt to defuse the bomb whilst aboard.

With plans hardly ever going how they should, passenger Annie Porter soon ends up being the driver and they are about to hit the early morning freeway traffic. Will Jack manage to defuse the bomb before the traffic grinds to a halt?

The picture is bright and richly colourful with masses of detail and high bit-rate throughout. With the large number of explosions and dark indoor scenes it really does benefit the overall enjoyment of the film. They must have also found another print for this release as there are no signs of the graininess that dogged the earlier DVD and Laserdisc releases. There's also no signs of any outlining or other picture imperfections that may afflict a film of this age, after all it is nearly ten years old!

The sound is presented in both a Dolby Digital and remastered DTS soundtrack. Although the action sounds just as good in either format, the DTS wins it hands down for me. You can tell from the moment the films orchestral introduction starts that the DTS soundtrack has a more spacious and clearer presence. Definitely a bonus for when the action kicks in. Never the less, this is still the perfect action film to showcase your surround sound system in either format. With plenty of LFE's, clear and precise dialogue, excellent stereo steerage and rear channels that are hardly ever idle, you couldn't really ask for much more from an action film.

With this being a special edition presentation from Fox I was expecting some sort of fancy animated menu system. Whilst the menu introduction section is quite impressive it seems to abruptly finish then show a static and slightly boring menu system. After such wonderful menu systems on films such as the Abyss and X-Men I was quite disappointed. I suspect that with this being back a catalogue title, even though it is classic Fox material, the menu system wasn't concentrated on too much and most of the efforts, and quite rightly so, were placed on the extras.

This special edition boasts a bountiful supply of extras, and in fact there are so many they need their own disc. There's two Audio Commentaries to accompany the film with the main track quite entertaining. One of the most interesting points was just how the elevator rescue was devised. However, the second track soon becomes boring as both narrators are constantly interrupting each other.

Things get better on the second disc with some great featurettes, storyboards and multi-angle scenes. Naturally, the multi-angle footage of the bus jump over the incomplete road section is the most interesting and there's eight camera angles to switch between. There's also an Interview with the cast and crew, five additional Extended Scenes and the now near standard HBO Making of, Theatrical Trailer and Music Video.

Although I normally hate paper packing, the case is reasonable enough with a pleasant sleeve design and inter gatefold sleeve. The only disappointment is the constant abuse dished out by the BBFC who insist that their rating is plastered all over the place. Surely it only needs to be in one place as it constantly defaces the artwork on many a disc.

Keanu Reeves and Sandra Bullock certainly have this film to thank for launching their film careers. Although Keanu has vastly improved over the years, especially in The Matrix, his acting in this film is wooden and at times annoyingly so. However, Sandra took to this film like a duck to water and really keeps things ticking along nicely. She definitely fitted the "girl next door" image here.

If you were unfortunate enough to purchase the initial substandard release then you should still go out and buy this disc set. The interesting commentaries and masses of extras on the second disc really make it a must buy, not forgetting the improvement in both the picture and sound.

Don't worry though, you can still put your old disc to good use. Now would be a good time to change that unwanted AOL CD beer mat. The only problem I could see with this disc would be that in the present climate of paranoia and terrorism is that this reissue may not be that well timed. However, at least we can thank Fox for not releasing this as a double film pack with the hideous, but cleverly named, sequel Speed 2. Even the director's commentary goes to great lengths to point out that they had nothing to do with it! It's another winner from Fox, and long may it continue.