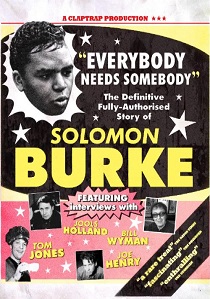 Solomon Burke : Everybody Needs Somebody

ReviewMusic
Review Article Go back to homepage
Paul Spencer's film follows Solomon Burke's journey from a humble Philadelphia neighbourhood known as "the Bottom" to New York and Hollywood, and the music industry's highest accolades: induction into the Rock And Roll Hall Of Fame.
Solomon Burke
Music
All
1 Hour 25 Minutes
Thank you for supporting DVD365.net when you order using the link(s) below.
Buy DVD
Story

Solomon who? The clue is in the title. That catchy song the Blues Brothers are now forever known for (well since 1980 anyhow) was written back in 1964 by the one and only Solomon Burke. Recently screened on BBC Television, Paul Spencer's film tells the story of a15 year old who recorded and released Christmas Presents to the present day Grammy winning father of 21 children, 79 grandchildren and 17 great grand children. There are contributions from various music luminaries, including the likes of Bill Wyman, Tom Jones plus friends and family as well as the man himself.

Bill Wyman tells us how the Rolling Stones in their formative years, covered three of his songs, Tom Jones admits that for him, Solomon left all the other soul singers in the shade, and Jools Holland explains how his powerful voice and magisterial presence guaranteed him appearances on "Later" as well as Jools' latest record. Producer and musician Joe Henry describes how, with the help of writers like Van Morrison, Tom Waits, Brian Wilson and Elvis Costello, he produced the record that won Solomon his first Grammy.

With the main documentary out of the way, the extras offer plenty of additional information for the fans. The ten minute featurette Jools Holland and Solomon in the recording Studio features interviews with Solomon's Son and Daughter, Solomon Jnr and Candy on backing vocals. Next up, the seven minute Joe Henry interview discusses the recording of the Grammy winning album "Don't Give Up On Me", the four minute Don Was interview discusses the recording of the Grammy nominated album "Make Do With What You Got" whilst the Solomon's Photo Album contains rare publicity shots plus photographs from Solomon's own personal collection

All the extras bar the photo album start with a word from Solomon and feature extended interviews to those on the main feature. The photo album is automated and backed by 2 older Solomon tracks, which is a nice touch and is certainly better than the silent 'advance yourself' ones I have seen.

To say he has been performing for five decades this is a really lightweight offering. The programme comes in at just under an hour long, with no complete performances of any of the songs. This is definitely one for the die hard fans who must have everything on their favourite artist. It makes for a reasonable hours viewing for a Sunday night TV programme but I cannot see this one being re watched with any interest.