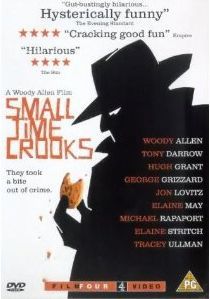 When inept ex-con Ray Winkler has a blinding plan to rob a bank he needs some assistance from his long suffering wife Frenchy and friends. He plans to rent a disused shop on the high street and dig his way to the bank vault whilst his wife runs a pizza shop as a front. Unfortunately, Frenchy isn't the best of cooks, but she can bake a mean cookie.

Together with a team of equally inept criminals Ray starts their tunnel in the shop basement towards the bank vault. Meanwhile, upstairs Frenchy's cookies have gained a bit of a reputation and large queues of customers, including the local police force, have started to form outside. With the money pouring in from legal means they are forced to take on additional help and all too soon a franchise deal springs up and they somehow find themselves at the helm of a multi-million dollar cookie empire.

For what is apparently a low budget film the picture is rather good. Although it can suffer from excessive amounts of contrast it is still bright and colourful with some good colour and flesh tones. There's no signs of artifacting or outlining and the bit-rate remains above average for the duration of the film.

For some bizarre reason the sound is only presented in mono so there is not much to say about any of the channels with the exception of the centre. But then again, Woody Allen has hardly been known to spend a fortune on production flippancies such as Dolby Digital 5.1 surround so. As a result, you may as well save some electricity and turn off your surround system and just listen to through a standard television.

Like the sound the extras don't add up to much either. I thought the time had passed when all a disc had was just a trailer. Perhaps Woody Allen likes to do everything on a shoe-string so, unfortunately, that's all we have here along with a boring and static silent menu system.

Previous FilmFour releases have been rather good discs. However, this comes crashing to an end with this truly substandard disc. Although the picture is reasonable enough, the sound is incomprehensibly in mono and the extras only add up to a paltry trailer.

The film does start off rather funny, especially when the slap stick capers start when the tunnelling begins. However, if you've seen the trailer then you've seen most of the film. I had high hopes for this Woody Allen film, but alas, I was sadly disappointed.

Special Features
Related Articles
Paddington 2, A Very English Scandal, Lair of the White Worm, Paddington 2, Florence Foster Jenkins, The Man from U.N.C.L.E., The Rewrite, The Pirates! In An Adventure With Scientists, Did You Hear About the Morgans?, About a Boy, Bridget Jone's Diary, Bridget Jones: The Edge of Reason, Two Weeks Notice, The Gentlemen, The Undoing, Mosley: It's Complicated
Killing Hasselhoff, I Could Never Be Your Woman, 3000 Miles to Graceland, Cats and Dogs, Rat Race, The Stepford Wives, Southland Tales, My Stepmother is an Alien
Tracey Ullman's Show, Girls On Top: The Complete Series, Girls on Top : The Complete Series
Fading Gigolo, Antz
The Heat, The 6th Day
Kill The Irishman
Son
Comments
RecommendedView