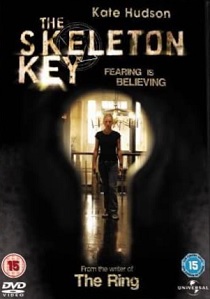 Caroline Ellis is a New Orleans hospice worker with a conscience and after a patient passes away while she is reading to him she is upset at the cold attitude displayed by her fellow workers to the deceased. She decides it is time for a change and answers an advertisement in the paper for a live in helper. The new job takes her to an old plantation house in the rather swampy Louisiana Delta where she is to look after elderly stroke victim Ben Devereaux. His wife Violet is advancing in age herself, and she can no longer help with Ben's care so, although reluctant at first, she soon accepts Caroline into the home.

Once settled in, and to allow her to move freely about the house, Ben's wife Violet presents Caroline with a special key, a skeleton key, which will open any door in the house. However, there is an exceptional to this rule as Violet claims that she's never been able to open the door to the attic. But with all those dark and gloomy corridors, ghost stories, and let's not to forget those dark and stormy nights, Caroline decides to venture upstairs to the room where Ben had his stroke. Naturally, with all those spooky noises, curiosity gets the best of her and Caroline finally manages to open the attic door and venture inside. It's in there that she finds it stocked to the rafters with hoodoo artifacts and a cursed history going back to its previous wealthy occupants.

Believing that Ben has not suffered a stroke, but is rather suffering from some sort of delusion brought on by his hoodoo beliefs, she decides that in order to bring him out of his stricken state she'll play him at his own game. Seeking out a voodoo doctor, Caroline collects a potion and instructions on how to perform the ritual to uncross him. After carrying out the ritual on Ben, Caroline is rather unsurprised to find that his speech has partially returned. However, he only manages to splutter out that he desperately wants to leave the house. But before he can talk any more Violet enters the room and puts a stop to things. Concerned that something is no longer right, and with new and previously none believing hoodoo beliefs and thoughts running through her mind, Caroline soon becomes embroiled in something far more sinister which will change her life forever.

The picture is bright and colourful with a high level of detail throughout. Still, given the rather creepy and dark nature of the film, these colours are a little more understated than your standard action or thriller film. With dark and gloomy locations paramount to any creep show, black levels are pleasingly solid whilst the colours in the interior scenes are rather muted. Fortunately, these darker locations don't result in a poor transfer and there's no sign of any grain, edge enhancements or artifacting. And given that it's such a recent release the transfer doesn't suffer from any signs of dust specks or other forms of picture imperfections.

Although the soundtrack is below the usual Dolby Digital 448 Kbps bitrate, the 384 Kbps soundtrack is more than adequate for its needs. It has all the usual sound effects associated with a creepy thriller, so the surround channels are kept fully occupied by various creaks, crashes, screams and the good old weather effects of rain and thunder. All it needed was a helicopter fly-past and every sound eventuality would have been covered. Dialogue wise, everything is clear and the precise in the centre channel whilst there's some good use of the front stereo channels for the directional effects. Activity in the LFE effect channel is kept to a minimum, although those weather effects do manage the occasional rumble.

The menu is animated and scored with an eerie piece of looped dialogue taken from one of the records Caroline finds in the attic. There are quite a few extras to be had, including a commentary from director Ian Softley, numerous featurettes and a pile of deleted scenes with a useful optional commentary. Unfortunately, although the extras are big in number, they can be a little thin which leaves the highlight being the trailers for two completely different films. Again, Universal feel it's a title where its necessary to time out the menus, so if you dwell too long on a menu you'll find yourself back at the main menu and re-watching the film. Still, I guess it does help prevent screen burn.

The main extra on the disc is the Audio Commentary from directory Iain Softley. Detail wise, it's a reasonably interesting commentary track with plenty of information on New Orleans, the location scouting, the importance of shooting on location (which does pay dividends on The Skeleton Key) and the use of the spooky music to increase the tension. There's the usual backslapping comments towards to the actors, including a near continual supply of praise for Kate Hudson, although some of his complimentary comments are probably quite justified.

The main block of extras are started off with twenty minutes worth of deleted and mainly extended scenes. The transfer quality is of a reasonable standard and director Iain Softley is again on hand to provide an interesting audio commentary. Each clip is chaptered, but with no menu to select a scene from you have to plough through them all in one go. The six minute Blues in Bayou featurette looks at the various New Orleans choirs, jazz and hip-hop bands used in the film. Given the rather short running lengths of the other features listed here, this one is unusually long. Mind you, this is not a bad thing as it certainly gives an indication of the musical vibrancy the city has to offer. There's also a far too brief look at the mysterious, and rather spooky sounding, record used in the film, but other than failing in that department, it's quite an interesting featurette.

The five minute Behind the Locked Door featurette looks at the making of the film. Whilst there's plenty of other fluff filled features, and even a Gumbo recipe, this made for television featurette is rather devoid of any real information about the films production. Still, there's a few nice clips of behind-the-scenes footage whilst the the various actors talk about all things ghostly and spooky. And no featurette would be complete without the usual set of back slapping comments, although these only tended to be directed towards John Hurt and director Ian Softley. The four minute Exploring Voodoo / Hoodoo featurette attempts to explain just what the religion is and what the difference is between Voodoo (the religion) and Hoodoo (the magic). The feature briefly looks at its African origins and how the slaves brought it with them to America. But whilst it's interesting enough, it still fails to explain just what the differences are between the two.

The three minute Recipe and Ritual - Making the Perfect Gumbo does exactly what it says on the tin - cooking a bit of Gumbo. We get the shrimp, meat (and turkey feet!) the vegetables and a big pan. Mix them all together and two hours later you've got yourself a big pot of steaming Gumbo. I'm still not sure whether I like the idea of those turkey feet though. In the two minute Kate Hudson's Ghost Story, Kate talks about a ghostly encounter she had as a child when she was staying with her mother in a house in London. The far too brief three minute Plantation Life featurette looks at the history of the plantations, the slaves, how much (or little) they were paid, where they came from and just how much their culture played in shaping Louisiana's culture. It's all interesting stuff. It's just a pity it's so short.

The nine minute Casting The Skeleton Key featurette is probably the best of the features, with plenty of behind-the-scenes footage, extensive interviews with the cast, clips from the film along with some good old on set antics and plenty of rain effects. Again, there's the usual back slapping comments from both the director, crew and the other cast members, but the various bits of on set footage more than make up for the fluff. The rather strange three minute John Hurt's Story feature has him taking on a Jackanory role and reading a story (I'm not sure from which book) about slavery. I guess because he didn't have many lines in the film he's making up for it here, but with plenty historical photographs and stills from the film it's a well read and interesting story.

The rather interesting five minute A House called Felicity featurette looks at the actual house used for film and a few of the bells and whistles added to the sets, like building the front of a house in a different location to get a tree lined boulevard, and creating a swamp at the back of the house. It actually does take some shine and mystery away from the house, but it does manage to highlight just how impressive and good a job the prop and set makers do, plus there's no a studio lot in sight. The final featurette, the one minute Gena Love Spell, has Gena Rowlands reading out instructions for a spell for love and friendship - you never know, it could be worth a shot. Things are rounded off with the trailers for Red Eye and the rather stupendous King King.

It may seem to follow along the lines of your typical 'woman in peril' films, but as it slowly gathers pace, stick with it and you will be rewarded with a great and rather unexpected ending. However, as with other films such as The Sixth Sense, and trying not to spoil the plot line for the uninitiated here, the more intelligent and forwarding thinking of people may well just grasp where the plot is heading. I managed it just in time, and I can tell you that it's a very satisfying penny drop indeed.

The only downside is that once you've watched The Skeleton Key you're unlikely to want to view it again. However, you may spot a few more plot pointers you missed along the way first time around. Never the less, if you don't fancy a purchase then a rental is most definitely worth consideration.