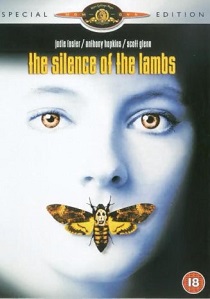 With a killer on the loose who skins his female victims, rookie FBI agent Clarice Starling is assigned to a team trying to locate the latest missing women, the daughter of a high ranking congresswoman. Starlings assignment is far from straightforward as she is assigned to quiz Dr. Hannibal Lecter, a sadistic cannibal held in a maximum security subterranean hospital, who may know the identity of the killer.

Before Starling can start to question Lecter she must first gain his trust. However, Lecter is not ready to talk and lays down a number of demands. He wants to move to a cell with a view and as a psychiatrist by profession he will only start to talk when he questions Starling about her memories and emotions. For each bit of information Lecter divulges Starling must expose some of her most painful memories from her childhood.

As Lector gives snippets of vital information Starling and the rest of the FBI team are soon on the trail of a Jame Gumb, a old patient of Lecter, who was refused a sex change operation on the basis of his mental condition. It now appears that he is making his own suit out his victims skin and time is running out for his latest victim.

For the age of the film the picture is bright and colourful with a high bit-rate throughout the film. There's no signs of artifacting or outlining with only a few dust scratches and other picture imperfections. The only criticism I would have is that there can be too much contrast at times and there doesn't appear to be any consistency to it. Some indoor scenes have too much contrast whilst others are well balanced.

The remastered audio is superb with the haunting musical score being really effective throughout the film. The dialogue is clearly audible in the centre channel and there is no need to keep adjusting the volume control. The surround channels are used effectively throughout the film by the score and ambient effects. It really adds that extras dimension to the tension of the film, especially during the latter half when Clarice is in the killers home.

The menu is impressively animated and scored with a nice CGI rotating tour of Lectors prison cell. However, once you access the audio menus they become static and silent. The menus are just as good on the second disc and although not as impressive as the main disc they are effective. The actual menu navigation is relatively confusing with small icons dotted around the bottom of the screen that don't easily highlight when you select them.

You could possibly argue that the addition of a second disc containing the extras is in order to justify the inflated price of this double disc set. However, the superb picture quality of the film could have been jeopardised to accommodate all of the extras, although there could be a question over the contents and whether a bit of disc padding was carried out.

I'm always suspicious of a company which produces a "collector's booklet" which turns out to be nothing more than useless information or a few pieces of paper stapled together. Fortunately, the booklet goes into some background information on the ideas for the book and eventual film. The gatefold paper sleeve is also well designed, although I do hate these paper boxes as they'll soon be falling apart after a few viewings. I don't know why "special edition" equates to "paper box". Never-the-less it is still impressive and adds to the overall value of the package, which it needs to be with the price of this double set.

The extras themselves are good with the new 'making of' documentary being especially interesting. The Deleted Scenes offer a little more story to the film but the majority are only seconds in length. There's the usual collection of Trailers and TV Spots and Trailer for the poor sequel Hannibal. There's even a bizarre telephone answering machine message.

There was no doubting that both Jodie Foster and Anthony Hopkins were perfect for their roles in the film. Indeed, their powerful and sometimes chilling performances earned themselves an Oscar for their efforts. When the film was originally released in America there were even reports of people being too scared to leave the cinema. It is not very often a suspense film of this genre can influence an audience so much, especially in the Hollywood films of today.

I often wonder whether Chris Carter got most of his ideas for Dana Scully's character in the X-files from Jodie Foster. Whenever Jack Crawford called out Starling's name it nearly always sounded like 'Scully'. The way the two dress and look is surprisingly similar. The fact that this disc is better than the original Criterion region one edition goes along way towards justifying it's high price. Even so, £24.99 for a double disc set is pushing the boundaries of what the public will pay. Excellent film, nice packaging. Shame about the price.