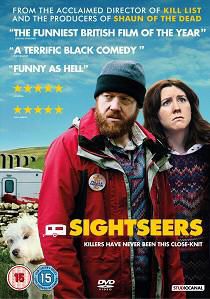 Brummie Tina is an introverted dog walker who lives with her mother who hasn't forgiven Tina for accidentally killing the family dog in a bizarre knitting accident. But things change when she meets the charming joker Chris. Soon Tina and Chris are waving goodbye to Mum and setting off for the caravanning trip of a lifetime - taking in the seemingly tacky, yet interesting looking, Northern attractions of Crich Tramway Museum, the Ribblehead Viaduct and the Keswick Pencil Museum - where they'll become the Bonnie and Clyde of the English countryside and where Chris can unleash Tina's hidden passions (crotchless knitted underwear anybody?!).

The first stop on Chris and Tina's road trip is the exciting Crich Tramway Museum. During the tour, Chris sees another visitor carelessly drop his ice-cream wrapper on the floor of a vintage tram. Chris is left seething by the litterbug's contempt and, as they prepare to leave the museum, he reverses the caravan over the litterbug. The horror of this "accident" provokes an emotional response in Tina and they can barely wait to tear each other's clothes off and have sex in the caravan in a busy truck stop.

With adrenalin still running high, Chris throws caution to the wind and speeds past a fellow caravanner in pursuit of the best pitch on the Dingley Dell camp site. But his satisfaction at getting the best pitch soon dissipates when he notices his neighbours - a loud group of chicken sacrificing Shamans from Portsmouth. Chris is further riled when he and Tina meet Ian and Janice and discover that Ian is a published writer - something Chris aspires to but cannot accomplish. The murderous look returns to Chris' eyes and he follows Ian the next morning to a remote bluff where he bludgeons him to death with a rock and steals his camera and dog, Banjo, for good measure.

However, Tina uncovers Chris's murder of Ian after first misreading the pictures on the stolen camera as evidence of an affair. Soon enough she gets to witness Chris commit another murder – a National Trust toff who takes issue with the couple over their dog fouling an historic site. But Tina does not seem put off by her partner's blood-lust, only intrigued. Tina might not have considered murder in the past, but seeing Chris club a man to death brings something out in her and, in a fit of jealousy, she kills a woman from a rowdy hen party whom she suspects of trying to seduce Chris.

With both Tina and Chris now seemingly out of control, and the relationship between the two steadily deteriorating, Tina commits yet another killing even more random than those before – running down a jogger on the side of the road. Chris is panicked by Tina's recklessness and the frequency with which they are now racking up deaths - with more murders committed in three days than in the six months period since he got made redundant(!)

Having accidentally left their dog with Martin, an earth loving eco-traveller they met at a previous camp site, Chris and Tina arrange a meeting on a remote cliff top. Martin and Banjo arrive in his pedal-powered cara-pod and Martin is subjected to a cringe-making evening with Tina and Chris before excusing himself for an early night. Following a vicious argument with Chris, Tina pushes Martin and his cara-pod over the side of the cliff towards a certain death. Chris is turned on by this, but also realises the fatal conclusion his relationship with Tina must reach. Chris and Tina, having agreed on a tragic-romantic suicide pact, stand atop the Ribblehead Viaduct and hold hands ready to jump...

Shot mostly on location in the Lake District, the images reproduced by the Blu-ray are rich and vibrant in colour with masses of detail. Needless to say, there's plenty of green, and conversely, bleak open spaces on offer and every scene is amazingly crisp, clean and pin sharp. Even the many dimly lit night time scenes look perfect without the slightest hint of moiré patterning.

The quality of the images even makes some of the more gruesome scenes harder to convince the viewer with, especially with the extremely tight budget limiting what special effects can be employed. Fortunately, the production team have also done a brilliant job with the make-up - especially for a particularly unfortunate victim of a caravanning "mishap" - and the extras help reveal their clever techniques.

However, there were a few scenes where the colour could go AWOL and giving the impression that some colour desaturation was occurring. I couldn't quite make my mind up whether this was a deliberate attempt to make the film even darker and moodier than it already is - or the more likely fact that the ever changing Lake District weather was muscling in on the act too.

Sound wise, the disc includes a number of basic audio tracks in the form of a DTS-HD Master Audio 5.1 track, an English 2.0 LPCM track and a descriptive LPCM 2.0 track too. Although dynamic enough, given that the film is heavily dialogue based and on an extremely tight budget, all the activity occurs in the front channels. Fortunately, the dialogue is crisp and clear at the front and there is no cross channel bleeding. Unfortunately, there is very little, if any, use of the surround channels, although the various wonderfully cheesy 80's pop tunes do manage to find their way about the sound stage.

Before you even get to the menu you have to navigate through a number of Theatrical Trailers for other titles - including the hilarious Four Lions, the chilling thriller Kill List and the completely bonkers horror Rubber. Once the trailers are dealt with you finally get to the pleasantly scored and simply animated (with our loving couples roadmap) menu system.

The thirty-six minute Behind the Scenes featurette is your typical featurette, with plenty of raw footage from the shooting of the film and various cast and crew interviews. The interviews with director Ben Wheatley and the other cast members soon discus how the long running idea for the project got off the ground along, the script (and large amounts of improvisation), the locations and a look at some of the rather gruesome special effects employed in the film. Whilst the way in which this featurette was put together will disappoint some, it still provides some interesting insights into the whacky minds of Alice Lowe and Steve Oram. It's certainly a worthy watch.

The Cast Commentary with Alice Lowe, Steve Oram, Richard Glover and director Ben Wheatley is a reasonable one. Whilst it does start of slowly, with perhaps a few nerves at what they're about to embark on, it's quite an amusing listen and Steve Oram and Alice Lowe pretty much carry on with their "wacky" comedy antics. Whilst there is a bit of duplication with the Behing the Scenes featurette, it's still worth a listen. The Technical Commentary with director Ben Wheatley and cinematographer Laurie Rose keep Steve Oram and Alice Lowe well away so the fun and games can be put to one side and the more serious matter of discussing the more technical aspects of the film can be made - although, again, there is some duplication from the featurette.

I used to be a fan of Outtakes, but when you have to endure thirteen minutes worth of people falling about laughing, swearing and making "funny" faces at the camera you soon realise that these types of extras are not really that funny after all. Finally, if you've not quite had your fix of Theatrical Trailers then you can also opt to watch a couple for Sightseers.

It's safe to say that Sightseers is nothing like what I expected - even if the Theatrical Trailer did give away too many of the film's best bits. Not only is it a hilarious, and original, black-comedy, the budget special effects are wonderfully effective and the gruesome demise of some of the people that Tina and Chris meet will have you cringing in your seats. The best way I can describe this is that it's like a demented Bonnie and Clyde. In a caravan, but without any bank robberies or guns. It's simply bonkers, but its observations truly hits the nail on the head (metaphorically speaking of course!)

Sightseers was written by Steve Oram and Alice Lowe and the pair are fairly familiar faces on television - usually in "surreal" comedy shows such as The Mighty Boosh and Wrong Door. The script provides Kill List director Ben Wheatley with some wonderful material to work with and he manages to bring to life a production, and a British one at that, which wouldn't look too far out of place from the Quentin Tarantino stable - although the wonderful poke at the British way of life and its classes would probably fly right over the head of pretty much every American. This is a very British black comedy and one that should be left for the British to savour.

Finally. A word of advise. Never trust a caravanner and, never, ever, ever, drop litter!