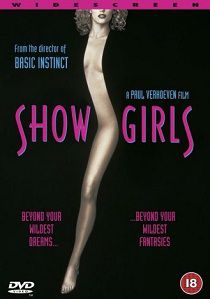 ReviewDrama
Review Article Go back to homepage
Fuel by ambition, Nomi Malone is determined to make it big in show business. Having to work as a stripper and lap-dancer in the clubs of Las Vegas she is soon discovered by Cristal, the star of a biggest and sexiest show in town, who gives her a chance at the big time.
Elizabeth Berkley, Kyle MacLachlan, Gina Gershon, Glenn Plummer, Robert Davi, Alan Rachins, Gina Ravera, Lin Tucci, Greg Travis
Drama
2
2 Hours 6 Minutes
Thank you for supporting DVD365.net when you order using the link(s) below.
Buy DVD
Story

Nomi is on her way to Vegas to dance. Along the way she manages to hitch a ride but when they arrive at Vegas she is ditched minus her suitcase. Naturally with all Americans being so kind hearted, plus the fact that Nomi was beating the crap out of Molly's car, Nomi ends up staying with Molly.

Molly, as you would expect, just happens to be working at the biggest dancing show in Vegas. Co-incidence or what? Nomi's impressive dancing soon works her way up from strip joint dancer to the biggest show in town 'Goddess'.

The acting is just awful, but the dancing is quite impressive and well choreographed throughout. The lap dance scene with Zack certainly stands out, and I defy any red blooded man to say that they weren't impressed. For a so called serious film I was in stitches of laughter at some of the dialogue and every time I saw Zack's haircut.

Both the picture and, especially, the sound are excellent. The music score throughout the film is cracking, especially in the clubs. The menus are well animated, with various body parts being thrust out at you in the background, and it is certainly worth congratulating Pathé on the efforts they made.

A directors commentary would have been a bonus, but I expect they wouldn't have seen Paul Verhoeven for dust when they asked him. It is just a shame the film is so poor, but the movie soundtrack might be just worth investigating.