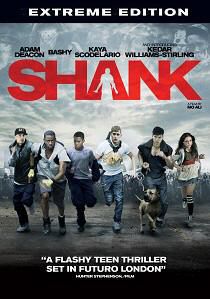 ReviewDramaThriller
Review Article Go back to homepage
It's London 2015 and merciless gang warfare dominates the decaying capital. The Paper Chaserz stay clear of trouble, but when a conflict with a rival gang gets out of control they find themselves in a terrifying chase across the danger-filled streets of London, risking their lives in search of revenge.
Kedar Williams-Stirling, Ashley Bashy Thomas, Adam Deacon, Michael Socha, Jan Uddin, Kaya Scodelario, Jennie Jacques, Rheanne Murray, Jerome Holder
Suspense/Thriller, Drama
2
1 Hour 26 Minutes
Thank you for supporting DVD365.net when you order using the link(s) below.
Buy DVD
Story

It's London 2015 and merciless gang warfare dominates the decaying capital. The recession has continued to ravage the city, unemployment has risen and the youth are disenfranchised with the rest of society more than ever. The gap between the rich and poor has grown to epic proportions and the price of food has sky rocketed. The police have given up hope, the government doesn't care and gangs have taken over. Food is scarce and "munchies" have replaced drugs and guns as a priceless commodity.

The Paper Chaserz are one of London's many gangs but they stay clear of trouble and, unlike some rival gangs in the area, they follow a non-violent ethos by avoiding carrying guns and knifes and preferring to trade scavenged food for money. So when the gang receive a tip-off about a food delivery they head over to the warehouse to relieve them of some much needed "munchies". But another gang turns up and they aren't in a mood to share out the food.

The Paper Chaserz flee, but the rival gang chase after them and manage to corner the fourteen year old Junior - their leaders' younger brother. But their leader Rager is on the case, and being a good fighter, his younger brother Junior sees him soon knock down the attackers. However, they soon get up again and Rager is stabbed and kicked to death by rival gang member Tugz. With little hope of saving his brother, and no way of defending himself, Junior has no other choice but to flee.

Distraught at the loss of his brother, Junior has to decide whether to throw the gang's ethos aside and revert to the worst and most primitive of urges - revenge. So Junior urges the other members of the gang to help him track down and kill Tugz. Fortunately, help is at hand in the form of three members of the Slaughter Gurlz: Tash, Ree Ree and Lexy. Will they dish out revenge, or will Junior relent and return to his non-violent ways?

The picture has a washed out look to it with a blue hue throughout. This is obviously a deliberate move by the director and it works with the film very well. The fast moving images and the animated scenes are handled with ease by the DVD and I'm not actually sure what benefit the Blu-ray edition could actually have over this excellent looking disc. The opening chase scene is certainly a fast paced and a frenetic one to keep up with, but the encoding process is a good one and there's no sign of artifacting or smearing. Naturally, given the recent nature of the release, this low budget title even manages to provide a print which is free from dust scratches or other forms of print damage.

It goes without saying that the main focus of the soundtrack in the film is the hip-hop and dance based musical score. You're never far away from a bit of drum and bass and virtually every other scene is accompanied by some thumping score. Needless to say, I'm sure fans of the film will probably want to check out the soundtrack CD too (or are we strictly MP3s these days?) Still, that doesn't mean that it drowns everything out as the dialogue is just as dominant in the proceedings. It's just a pity that the actual dialogue is a little too cheesy for my liking.

Unfortunately, being a preview disc, there was a complete lack of any extra material or any form of menu system. I ended up obtaining the extras detailed below from the BBFC website and the EPK which was sent to me for review. Never the less, judging by the high production values of director Mo Ali and his rather unique cinematography, I'd hope that both the extras and menu system do justice to the release.

I guess you have to be a member of today's "yoof" as I hardly had a clue at what they were talking about. With the film full of enough "street talk" to confuse the majority of its viewers, it can certainly be a challenging viewing. Matters aren't helped by some hideous, and rather repetitive, dialogue that had me cringing in my seat and despairing over what today's "money for nothing" and "everything now" teenagers are expecting from life.

Never the less, the cinematography is certainly imaginative, with some echoes of Children of Men and Clockwork Orange, but itüs the sudden switch to an "arcade game" view that reveals its true target audience - an audience brought up on real street violence and murder plus computer based violence from the likes of Grand Theft Auto.

Unfortunately, even though there were a few moments when I'll admit to laughing at the teenage banter, it all ends up as a bit of a mess with a message that is poorly delivered and woefully executed with some laughable dialogue and acting. Still, it's sure to be a hit with those grumpy teenagers, and if you enjoyed KiDULTHOOD then you're bound to enjoy Shank too. It's just a pity that the film shares its title with a different kind of gang related film!