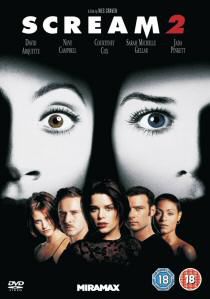 Gail Weathers meanwhile has made a fortune by writing a book of her experiences of the original murders. The book has been made into a film called "Stab" and Sidney deeply resents Gail Weathers for this. However when the murders get too close to home for comfort, everyone comes together to try and stop the copycat.

Or....How to make a sequel the same as the original film. Its too close to the original film in plot and smacks of "we made a packet on the first....lets make the second the same just to make sure". There are also inconsistencies, one of which is at the beginning when people are watching "Stab" in the cinema, the actress is replaying the original start of "Scream" as Drew Barrymore. No-one saw what happened to poor Drew, so how could they possibly know? Lets face it, this is a typical sequel and is no where near as good as the original Scream.

Strangely, although the original is far superior as a film, the sequel has a better picture. The bit rate is about the same as the original, but things seem much brighter with fairly good colour separation. The picture is still average, but its on the better side of average unlike the original which was on the side of terrible average!

Sound is also better than the original with much clearer dialogue and better use of the surround channel. The scene in the theatre is a good example of the improved surround usage with a very nice echo.

Again, Miramax have decided to err on the side of caution and not bother to include any extras. What is wrong with these people? Even though the picture and sound are much improved, buy the VHS version owing to the film being distinctly average and the video version being cheaper.