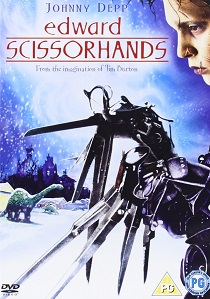 One day a lonely inventor decides to invent himself a friend and so creates Edward. The inventor treats him as his own son and even teaches him the rules of etiquette and reads him poetry. However, he hadn't completely finished creating Edward and the inventor dies before fitting Edwards hands, leaving him with a bizarre set of scissors for hands.

Desperate for business local Avon lady, Peg Bogg, decides to venture up to the inventors mansion where she discovers Edward. Feeling sorry for him she decides to take him home to live with the Bogg family. Initially hesitant, Edward becomes part of the family and shows a flair in gardening and hairdressing as he remodels the Boggs garden hedges and cuts Pegs hair.

Edward soon has the nosey neighbours talking and they are desperate to meet this strange new person. Just as Edward is settling in and becoming the toast of the neighbourhood by pruning every hedge and cutting their hair, things start to go wrong. Edward finds himself falling for Kim, but her boyfriend takes advantage of Edward and those razor-sharp fingers become just a little too much of a problem.

The picture is bright and colourful with a high bit-rate throughout the film without any signs of artifacting or outlining. With this being a Tim Burton film we can expect a large amount of dark and gloomy scenes, and indeed we have them by the bucket load. The rich pastel colours of the neighbourhood could not be any more different from the dark and gothic mansion, but this disc takes everything in its stride and as a result produces a superb picture.

Although the soundtrack is only 4.0 surround, you should not be put off as it still manages to give some fabulous results. The wonderfully haunting and dramatic soundtrack, so much a trait of any Tim Burton film, really envelopes you and uses all of the available channels to their full potential. Ok, so there's no LFE's, and the rear channel is only mono, but the crystal clear dialogue and musical score are perfectly balanced and it really adds to the enjoyment of the film.

The extras are interesting enough, although the Spanish TV spots seem a rather bizarre addition to the disc. The menu is impressively animated and scored and it makes a change for back catalogue material, classic or not, to be given this treatment rather than just issued as a purely profit making exercise.

The acting from Johnny Depp is first class and, as usual, Winona Ryder looks as beautiful as ever. This is classic Burton film which you should not miss.

Special Features
Related Articles
The Ballad Of Lefty Brown, Boulevard, The Age of Adaline, Machine Gun Preacher, Last Chance Harvey
Pirates of the Caribbean: On Stranger Tides, The Tourist, Murder On The Orient Express, Pirates of the Caribbean: Salazar's Revenge, Alice: Through the Looking Glass, Mortdecai, Tusk, Transcendence, The Lone Ranger, Dark Shadows, The Rum Diary, Pirates of the Caribbean: On Stranger Tides, Rango, The Tourist, Alice In Wonderland, Gonzo, Blow, Pirates of the Caribbean: At World's End, Pirates of the Caribbean on Blu-Ray, Pirates of the Caribbean: The Curse of the Black Pearl, The Rum Diary, Sleepy Hollow, Sherlock Gnomes, Fantastic Beasts: The Crimes of Grindelwald, The Professor, Fear and Loathing in Las Vegas
Homefront, Black Swan, The Age Of Innocence: The Criterion Collection, Bram Stoker's Dracula: 25th Anniversary, Obsessed, The Iceman, Frankenweenie, Stay Cool, Black Swan, Bram Stoker's Dracula: Deluxe Edition, Beetlejuice, Girl, Interrupted, Lost Souls, Heathers, Destination Wedding, Beetlejuice
Going In Style, Christmas with the Coopers, Stand Up Guys, Argo, Glengarry Glen Ross, The Change-Up, Get Smart, Marley and Me, Rocketeer, Dumbo
Tower Of London, The Raven, Tales of Terror, The Comedy of Terrors, The Complete Dr Phibes, The Pit and the Pendulum, Theatre of Blood, The Fall of the House of Usher, Bloodbath At The House Of Death
Krampus
The Last Act, In Treatment: Season 3, Rabbit Hole, Practical Magic, The Mule
Foxcatcher, Dead In Tombstone, Weird Science, Sixteen Candles, Weird Science
Just Like Heaven
Comments
RecommendedView