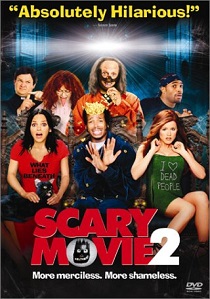 A year after the events of the first film the survivors have left school and are now at college trying to put last Halloween behind them. As part of a class project Professor Oldman has arranged for the class to study sleeping disorders at Hell House. However, this is a cover for a more sinister project as Hell House was the location of a particularly nasty exorcism. Still sound familiar? Well is should as those Wayan brothers have been at it again. Flushed with success with the first movie, and no doubt attracted by some executive waving money at them, they've come up with another dig at the movies.

Although it is no where near as funny as the first film, with no apparent story line let alone conclusion, there's plenty of digs at The Exorcist, The Haunting, What Lies Beneath, Hollow Man, Hannibal, Charlie's Angels and Crouching Tiger, Hidden Dragon.

You can instantly tell that the film had a bigger budget over the first installment with the quality of the picture. It is bright and colourful throughout the film with rich flesh tones. There's certainly no signs of artifacting, outlining or picture imperfections.

Unlike the first film the rear channels have been employed much more by the ambient and general effects. The dialogue is crisp and clear in the centre channel and there was never any need to keep adjusting the volume controls, even during the noisy visits by the ghost. Again, it is a case of bigger budget, better audio.

The extras are vastly improved over the first film and the DVD technology has been embraced with its many references by a particularly obnoxious parrot. The deleted and alternate scenes run over thirty minutes and the making of featurettes are reasonable enough. The menus are nicely animated and scored and be prepared to be insulted by a parrot as he squawks his way through the extras menu..

If you are fan of the laughing and finger poking genre of films then you'll probably going like this film. Although the plot is nonexistent and it basically ends up being a number of joke scenes more at home on Saturday Night Live, it's short enough to keep you chuckling and the extras give it extra value.

As with the first Scary Movie disc it is encoded as region four as well as region one. I'm unaware of other DVD's being encoded in this manner, apart from the region two and region four combinations, so Australian DVD owners may be in for a good time.