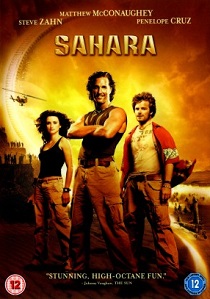 ReviewComedyAdventure
Review Article Go back to homepage
Whilst seeking out a lost Civil War battleship known as the "Ship of Death", explorer Dirk Pitt finds himself on an dramatic adventure in the deserts of West Africa and coming to the aid of a UN doctor who's being hounded by a ruthless dictator.
Matthew McConaughey, Steve Zahn, Rainn Wilson, William H. Macy, Penélope Cruz, Jude Akuwidike, Clint Dyer, Maurice Lee, Delroy Lindo, Abdul Salis, Tosin Sanyalo
Action/Adventure, Comedy
2
1 Hour 59 Minutes
Thank you for supporting DVD365.net when you order using the link(s) below.
Buy DVD
Story

Dirk Pitt works for Admiral Sandecker and NUMA (The National Underwater Marine Agency) which is basically the underwater version of NASA. Essentially a research organisation, although with America's interests at heart, NUMAs research includes deep-sea geology and mining, marine archaeology, biological studies of sea life and the study of the effects of oceans on the earth's climate. Whilst it doesn't sound that exciting, Dirk Pitt and his NUMA colleagues always seem to be up to their necks in one adventure or another with Dirk having the knack of turning up just in time to save the day. And with Dirk's rugged and suntanned looks, he's a big hit with the ladies too. It's no wonder he's a bit of hero.

As a bit of a hobby on the side, Dirk spends a lot of his spare time searching for a Confederate Ironclad which went missing at the end of the American civil war. Trouble is, his trail is running cold and there's not much to go on. However, rather this putting him off, Dirk is driven by the challenge to find "The Ship of Death". So in a rather bizarre stroke of good luck during a NUMA marine archaeology mission in Nigeria, Dirk is presented with a gold coin from the fabled ship. Just how an earth did such a coin, and the local legend of a large iron ship sailing up the river never to be seen again, find it's way to Nigeria? There's only one thing for it, Dirk must follow this tempting lead further and with the assistance of his trusty friends Al Giordino and Rudi Gunn, and Admiral Sandecker's precious motor launch, they head up river to investigate.

But the legend of the ship lies in the neighbouring country of Mali which is undergoing the strife of civil war. And the last thing that country needs at the moment is a group of nosey Americans poking around their country and reporting their findings to the outside world. So it's hardly surprising that their boat is soon met by a group of rather unfriendly gunboats. However, things become even more sinister when Eva Rojas, a WHO doctor investigating a new plague which has the possibly of infecting the neighbouring African countries, is attacked by a group of thugs and her team murdered in cold blood. Why are the locals so touchy about outsiders? There's only one thing for it. Dirk and his team must press on further in land to find a mythical ship and avert a possible disaster of global proportions.

The picture is bright and colourful with a high level of detail throughout. Given that the majority of the film is set in a hot and sunny Africa there is plenty of light and extremely bright scenes. Fortunately, it takes everything in its stride and there are no problems with either grain, pixelisation or edge enhancement. It even manages to reproduce a wide range of rich and vibrant colours along with some excellent flesh tones. And if that wasn't good enough, the cinematography is at times amazing whilst the transfer is near perfect with no signs of dust scratches or other picture imperfections, although for such a recent theatrical release I wouldn't be expecting anything less.

Like the picture, the sound is just as an all action film should be. With plenty of surround effects throughout, clear and precise dialogue in the centre channel, good stereo direction in the front channels, a thunderous musical score that envelops the soundstage and even some LFE effects you'll be hard pressed not to be taken in by this impressive and involving 448 Kbps Dolby Digital 5.1 soundtrack. Sound highlights would have to be the opening scenes with a Confederate Ironclad ship being bombarded with canon fire and the room shaking "Panama" boat chase scene where an impressive stream of motor launches and bullets ricochet all around the soundstage. If you ever needed an excuse to buy an action film on sound merit alone, then Sahara fills that bill with ease.

The menu is pleasantly scored and animated with various cut scenes from the film whilst the sub menus are static and silent affairs. However, there's one menu which is missing that should cause alarm amongst DVD fans - the Extras menu. For a film such as this I'd be expecting behind-the-scenes featurettes, interviews and perhaps even an audio commentary from either director Breck Eisner, writer Clive Cussler or even some member of the casts. However, I hate to report that Sahara comes equipped without a single extra what-so-ever, not even the Theatrical Trailer or trailer for some completely unrelated release. Perhaps the film didn't do as well as they'd expected and it's simply been farmed out to make a little bit of extra money with very little effort.

I thought we'd come along way from the region two vanilla releases of the past so it's a great shame and disappointment that Paramount could even consider releasing a premium title such as this with a complete and utter lack of extras. It's made all the worse by the fact the region one edition comes equipped with said audio commentary, featurettes and deleted scenes. I even considered that the preview copy reviewed here was a cut down version for the press, but investigating the release details further I uncovered an equal lack of extras. My only hope is that in the future a fully featured special edition will be in the offing. Never-the-less, future special edition release or not, I'm still bitterly disappointed with what Paramount have offered here.

With National Treasure a complete and utter disappointment, decent action films have been rather thin on the ground of late. As a result I sat down to watch Sahara with a great deal of trepidation. Matters weren't helped by the fact I've already read a number of Clive Cussler's excellent Dirk Pitt books and, with Hollywood's tendency to completely ruin a transition from book to big screen, things weren't looking very promising for Sahara at all. However, this Hollywood trend can't continue forever and there must be a good action film out there somewhere. Fortunately, for actions fans that long wait is over with Sahara - an updated Indiana Jones meets James Bond.

I'm sure Clive Cussler likes to think he's modeled Dirk Pitt on himself, but cast wise every major character in the film is taken up by the perfect set of extremely white teethed actors and the casting director and producers can take a hefty pat on the back for their efforts. William H. Macy is perfect as Admiral Jim Sandecker, Rainn Wilson is perfect as Rudi Gunn, Steve Zahn is perfect as the humorous sidekick Al Giordino whilst Matthew McConaughey is just the right man for the swashbuckling NUMA adventurer Dirk Pitt.

With no extras I find it very difficult to recommend this film - after all, at its full RRP of £19.99 it's hardly looking bargain material and the region one version has our missing extras. However, its saving grace is the fact that Sahara is such an entertaining action film with plenty of comedy moments in all the right places. It even sets the scene up nicely for Dirk Pitt to return in a sequel and, since Clive Cussler has had the decency to write a number of books, we could even be graced by a series of films. Let's just hope that those future DVDs are up to scratch.