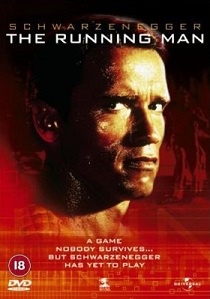 The year is 2019 and law and order has broken down. America has turned into a police state with little sympathy for its inhabitants, let alone the criminal elements within. With the government controlling all of the television and radio channels there is little or no chance of finding any entertainment from the heavily censored programming.

The most popular show on television is the Running Man. This is a game show that gets its own back on the criminal by offering any convict, innocent or not, the chance of a full pardon. Unfortunately, winning a pardon is not going to be as easy as guessing a few pictures or values of playing cards. These contestant are forced to run for their lives as they are perused by numerous heavily armed stalkers. Naturally, there aren't too many winners.

One such contestant is ex-army helicopter pilot Ben Richard. Having refused to fire upon a group of people he was framed by the government and imprisoned in a hard labour camp. No camp is going to hold a thoroughly cheesed off Ben so along with a group of resistance fighters they soon make their escape. Unfortunately their freedom doesn't last long and they soon find themselves on the countries favourite television show. But this time it is the stalkers who have become the hunted.

The picture can be only rated as average with a picture full of imperfections, noise and dust scratches. It's almost like the film was sourced from an old video rental tape. Although the colour detail is reasonable enough, and there are no real signs of artifacting or outlining, for a film of such significance for Arnold Schwarzenegger's career you would have thought some attempt would have been made to clean it up a little.

If you thought the picture was bad enough then you are not going to be getting excited by the stereo soundtrack. It really is a mess with no real scene of depth or direction. For an action film it is truly criminal and detracts from what an action film is all about. Even the dated eighties soundtrack sounds so awful it comes to the point of being embarrassing.

With a poor picture and soundtrack there isn't much hope for the menu or extras. The menu is a static and silent affair with only a picture of a scowling Arnie in a spandex track suit. The only extra available is the standard theatrical trailer and, unsurprisingly, that picture quality is also on the poor side.

Although the movie music and various clothing makes the film look incredibly dated, it doesn't prevent it from being a classic. If you are an Arnie fan and can to put aside the problems with the picture and sound you'll soon realise that this is the film that finally launched Arnies mega-career skywards. And let's not forget that his famous catchphrase originated here to.