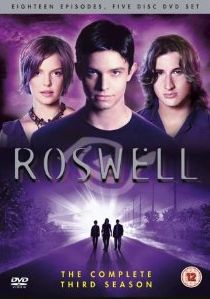 Roswell Series Three continues to chart the lives of the alien inhabitants of Roswell, New Mexico where a trail of devastation and destruction has been left in the aftermath of Tess' shock departure. Tess has taken Max's unborn child back to their home planet and Max is left feeling alone and confused towards Tess and his unborn son. Max travels to LA to locate the last remaining shape-shifter on earth who may hold the key to finding his son. He discovers that his shape-shifting former guardian is now a Hollywood producer and he grudgingly helps Max search for his recovered spaceship in the hope that it will hold some clues to their future and survival.

Back in Roswell, Isabel's dream of a normal life finally comes true when she falls in love with Jesse, a young associate in her father's law firm. After a whirlwind romance, Isabel and Jesse get married, despite the concerns of her family. Isabel must also contend with the unexpected and unnerving presence of her former lover Kivar who arrives on earth to try to take her back to their home planet. Meanwhile, Liz begins to suffer ill effects from being healed by Max that fateful day in the Crashdown Café and begins to take on some of Max's powers. It soon becomes apparent that being around Max is hurting her and so she must leave Roswell and Max behind for her own well being.

The aliens lives are becoming more endangered as Max and Isabel's father grows increasingly suspicious of Max and begins to spy on him, tracking his movements and actions in an effort to find out the truth about his son. And when Tess returns to earth with Max's son, the aliens realise they must finally come clean and confess their secret to their parents. But when they learn the FBI have recruited Jesse to spy on them, they realise the US government is hot on their trail and the group must make plans to disappear after graduation.

There are four episodes per disc, giving a running time of approximately 3 hours. The episodes in the season three box-set are as follows:-

For a television series there is never going to be anything particularly special about the picture quality. Although the picture offers a reasonable level of detail, with no apparent problems with either artifacting or outlining, during some of the darker scenes it can become rather grainy. And as with most US television series, the NTSC to PAL transfer is the prime cause of the majority of the transfer problems with colours which can become over saturated whilst high contrast levels can again result in problems with grain.

Like most other television series released on DVD, the 448Kbps Dolby Digital 5.1 soundtrack is nothing special. Still, the soundtrack is reasonable enough with most of the audio directed towards the front and centre channels. There is the occasional use of the surround channels whilst the occasional audio score sounds impressive enough. However, the sound highlight of the entire programme has to be the Dido sung theme tune and I often wonder which one came first - Dido or Roswell.

The menus across each of the five discs are pleasantly animated and scored and whilst there's very little too them, with only episode selection options, they are certainly in keeping with the series. The extras are scattered across the five discs and include four episode Commentaries and a Class of 2002 featurette with some reasonable interviews with the cast and crew on the final disc.

The series of Roswell did get off to a good start and with the likes of The X-Files and Millennium doing the rounds it seemed to be a good idea to tap into a similar theme and cross it with something more akin to Beverley Hills 90210. I don't think I really match the target audience, but never the less I did actually get quite into the first series when it was first shown on Sky a number of years back.

Trouble is, after season one things in Roswell went rapidly downhill and, if we are going to be brutally honest here, you can see just why the series was canned after only three seasons. The storylines appeared to be made up as they went along and there was a definite hint of blank minds sitting around the scripting tables with rapidly approaching deadlines. Matters are made all the worse by the completely rushed series conclusion (although it does leave the ever so slightest chance of another or spin-off series) that left me utterly unimpressed.

Roswell Season Three is only ever going to be bought by true fans of the series and as a result they'll probably like the series rather poor conclusion either way. It is also has the unfortunate stigma of being a series which cannot be picked up at such a late date. This is definitely one for the fans only.

DVDBDTVBoxset
24/08/2020
After saving the world via the power of song and themed entertainment, the Legends deal with the aftermath of last season's finale in Legends Of Tomorrow: Season 5, released on DVD and Blu-ray 21st ...