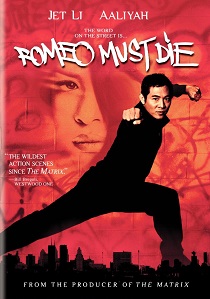 Han Sang is an ex-cop who went to prison in Hong Kong in order to let his father, a Chinese crime lord, and his brother escape to Oakland in San Francisco. When his brother is murdered, supposedly by a rival black gang, Han breaks out of prison and heads for America to uncover his brother's killer and to avenge his death.

Once in America Han discovers that his family is in the middle of a fierce turf war with a gang of blacks in an attempt to create a new, and money making, stadium in the rundown Oakland docklands. Searching his brothers apartment for information, Han soon finds help from Trish O'Day, the daughter of the rival gangs leader, and together they work to uncover the cause of the mounting body count.

The picture is bright and colorful with a high bit-rate throughout the film. However, the picture can be grainy at times and there were clear signs of artifacting in the background of certain scenes. In some of the more outrageous fight scenes the special effects were also clearly visible, but why Jet Li required special effects to enhance his fighting techniques is beyond me.

The sound is crystal clear with the dialogue locked in the center channel without any bleeding to the other channels. Although there was occasional good use of the rear channels, it was mainly used by the musical score. There are plenty of LFE's during the film, but they only tend to be used by the thumping bass of the soundtrack.

Romeo Must Die is produced by the same people who brought you a certain film called The Matrix and it is very easy to see the influence during the fight scenes. The plot is drawn out way too long, and how many dodgy films have used the idea of revenge for the death of a sibling? However, it is well worth waiting for the fight scenes as we see Jet Li at his best, and not aided by a computer. The screen debut of the beautiful singer Aaliyah was surely not going to be her last, but a plane crash cut her promising acting career brutally short.

Unlike the UK cinema release, this region one edition has not had cuts made to the fight scenes, and rumours are circling that the BBFC will make additional cuts to give the film a 15 video certificate. If this is the case, and your a fan of Jet Li, then you should definitely be buying this edition of the film. Let's just hope that Jet Li will be able to show off his amazing abilities in more films, and without having to resort to the comedy path Jackie Chan has taken.