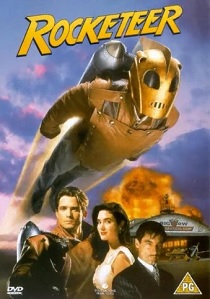 It's 1930's America and the Nazi's are preparing to invade Europe and start a prolonged war. They would dearly love to get hold of a top secret rocket-pack but their plans are thwarted when the mafia goons employed to steal the unit are intercepted by the FBI and they are forced to hide it in an aircraft hanger.

However, the package is soon discovered by Cliff, a young pilot who's down on his luck after a near fatal plane crash. Together with his mechanic friend Peevy they manage to do something that the engineers couldn't - make it fly. When an incident at an air show causes Cliff to intervene the world is introduced to the rocket man. With the Nazi's now alerted to its location they get a highly placed Hollywood spy on the case and he'll stop at nothing to retrieve it for the fatherland.

The picture is first-rate with a rich and vibrant picture with some excellent colour tones. With an above average bit-rate throughout the film there were no signs of any artifacting or outlining. It is the perfect picture to highlight the stunning beauty of actress Jennifer Connelly.

The sound is excellent with some wonderful use of the surround channels. which is especially evident during the rocketeers aerial exploits. The dialogue is also commendable as even during the many action scenes it remains clearly audible. However, the only slight disappointment is the lack of the LFE channel. This film would have definitely benefited from that extra punch that only a subwoofer can provide. Never-the-less, it is still a great film to listen to.

Unfortunately, with this being an early entry into the DVD market there are no extras what-so-ever and even the menu is static and silent and it takes the value for money shine off the disc. However, don't be put off by the lack of extras, or the lack of the LFE channel, as it is still an extremely entertaining action film with Timothy Dalton making an excellent baddy, especially with his exploits as Bond still fresh in the mind.

Similar to the old television series, there were plans to make further films. Unfortunately, for a critically acclaimed film, it failed to pull in the necessary money at the box-office to justify further films. A great shame really as this is a cracker of a film. Highly Recommended.