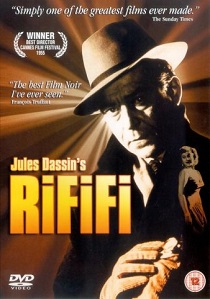 Tony le Stéphanois has just been released from a five year stretch in a French prison. Conditions for this veteran thief have not been good to him and he is suffering from tuberculosis. It is not long before he is approached by two of his underworld friends who are planning to rob a jewellers. However, he is naturally reluctant to get involved and has no plans to return to a career that placed him in prison in the first place.

But when Tony discovers that his ex-girlfriend is now living with another man he changes his mind and ups the ante by suggesting a more ambitious, and extremely profitable, hit on an up market jewellery store. So begins the gangs meticulous planning and observations. Not only do they have to get past a new and advanced alarm system, but they need to ensure that they won't be interrupted during what will be an exhausting and time consuming robbery.

But as usual, plans are never perfect and once the robbery has been performed without a hitch, one member of the gang makes a fatal mistake which will have devastating consequences for both them and their families. It's a mistake that enables the local mob to uncover just who was responsible for the robbery. Now they want the takings and and if they don't hand over their ill gotten gains the mob will murder one of the gang members children. But Tony knows all too well that the child will not be returned alive so he sets about hunting down the mob before it is too late.

The black and white picture has been digitally remastered and as a result is stunning. The bit-rate remains above average throughout the film and there's a surprising amount of detail with no signs of artifacting, outlining, graininess or dot crawl. There are only one or two picture blemishes and dust scratches evident, but for a film of this age it can be easily forgiven.

Mind you, as part of the digital remastering process aren't you suppose to clean these sorts of problems up? Also, these few problems only seem to creep in towards the end of the film and it's almost as if the person who was responsible for the remastering process went home early. Never the less, it was a complete surprise to see a picture of this quality and I'm sure the picture reproduction even surpasses the original print used at the films premiere way back in 1955.

Whist the picture is superb the sound is, unsurprisingly, in mono with nothing really worth getting your surround system excited about. However, saying that, the dialogue is crisp and clear whilst the orchestral score manages to dramatically heighten the tension. However, I'm sure that the dialogue will only be of interest to French speakers as, unlike the trailer and perhaps other international versions of the film, the soundtrack is in its original French. If an English soundtrack could have been included then it would have really increased the films appeal, especially to those who normally reject films which are not in their native tongue.

The main menu is pleasantly animated and scored whilst the submenus are static and silent. However, the menus are effective enough and I was more than surprised by the effort which has gone into producing this disc, especially when it comes to the extras. It certainly puts many high profile, and big budget, titles to shame.

The extras are surprisingly detailed with an interesting set of production stills along with the standard theatrical trailer - in English. However, the highlight of the package must be the 30 minute interview with director Jules Dassin's - it's just a pity he couldn't stretch to a audio commentary track. Dassin discusses the films production along with his blacklisting by the Un-American activities Committee where, back in the 1940's, just about everyone in Hollywood was being accused of being a Communist. Not being able to work he decided to move to France to continue with his career and, unsurprisingly, there's still a hint of bitterness in his tone. Anyway, it was Hollywood's loss and Europe's gain.

I wasn't really sure what to expect of this film and not being a real film noir fan I feared for the worst. However, I was totally gripped by this film from the moment it started and soon found that the subtitles weren't that annoying - I was even managing to polish up on my French which I hadn't used since leaving school over 15 years ago. You can always tell when you're totally absorbed in film when you don't even notice the subtitles.

I would also have to agree with the many people who say that Rififi is one of the best ever noir films and that the robbery scene is the best ever to grace the silver screen. Although the robbery looks extremely dated, with an advanced alarm system control box that looks positively ridiculous with its bell and bit of wire, the film was actually banned in some countries as being too helpful to the criminal fraternity.

The robbery scene itself lasts for nearly thirty minutes and during that time not one word is uttered as they silently and meticulously get on with the job in hand. It is this scene alone that ensured the film received its cult status and following. It really does have to be watched in order to be believed. I can't rate this film highly enough and if you're a true film lover then you'll be sure to want this film

3D-BD
In Incredibles 2, released on DVD, Blu-ray and 3D Blu-ray on 12th November 2018 from Walt Disney Home Entertainment, Helen is called on to lead a campaign to bring Supers back, while Bob navigates the ... END_OF_DOCUMENT_TOKEN_TO_BE_REPLACED
Latest ReviewsView