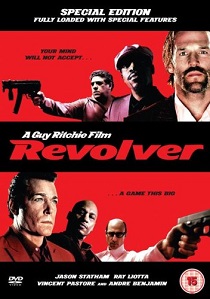 Gambler and conman Jake Green always ran with a bad crowd and it cost him seven years of his life when he took the rap for the mean Dorothy Macha, winding up in jail and in solitary confinement for good measure too. After his release, Jake becomes unbeatable at the tables using a formula for the ultimate con that he learned from two mysterious fellow prisoners in adjoining cells. Now he is ready to take his revenge, and he's got the all powerful Macha in his sights, and just as he's hatching a plan to make himself all the more richer.

Macha is plotting to eliminate his ruthless rival Lord John, a Chinese drug baron, and he's staked his credibility on a huge drug deal with the all powerful, and mysterious kingpin, Sam Gold. After Jake visits Macha at his casino and humiliates him publicly in a game of chance, and fearing more of the same medicine, Macha decides to remove the problem by putting out a hit on Jake. But just as he is about to be shot, Jake finds his life inexplicably saved by the enigmatic Zach who, along with his equally inscrutable partner Avi, are a bunch of small time lone sharks.

After an incident where he fainted, and during the routine check up at the hospital that followed, Jake discovers that he's suffering from a rare blood disease that will kill him in three days. After getting confirmation of his condition from another medical source, and with nothing left to loose, he takes up the offer of protection from Zach and Avi. But it comes at a price and Jake is forced to give all his money to the boys which is then used in their money lending business. But the boys have bigger ideas and Jake has just found himself playing the biggest games of his life.

It would be quite easy for Guy Ritchie to simply release a vanilla disc with little or no effort going into the presentation and forget that it ever existed. However, the transfer quality of Revolver seen here is a little bit special. The picture is wonderfully bright and colourful and the DVD handles everything thrown at it with ease. The transfer is graced with high level of detail throughout, varying (and deliberate) levels of colour tones plus some excellent flesh tones. The solid black levels are as equally impressive and exhibit no signs of either artifacting or grain. There is an ever so slight problem with outlining at times, but on the whole, the colour definition and clarity is simply dazzling. Also, given that it's such a recent theatrical release, the transfer is also free from signs of print damage.

The film is accompanied by 448 Kbps Dolby Digital 5.1 and 768 Kbps DTS soundtracks. As the dialogue is the focal point of the film, both soundtracks offer some clear and precise dialogue firmly locked in the centre channel whilst the musical score ticks along nicely in the centre and front stereo channels. Unfortunately, the rear channels are surprisingly silent throughout the film and they are used rather sparingly by the ambient effects and the musical score. Never the less, when they are used, they are used effectively. However, I failed to pick up any real use of the LFE channel which, given some of the scenes, it was quite a surprise. Never the less, whilst both soundtracks are more than capable, the superior separation of the DTS soundtrack makes it the track of choice.

Although ultimately impressive and effective with some nice transition effects and 5.1 audio score, the menu system isn't half confusing. Before sitting down to watch the film I was aware of what extras were available. So when I couldn't find them on the check disc I was about to write a scathing review about the supply of discs to reviewers. However, looking a bit closer, and by using the Left and Right buttons on my remote, I found a full compliment of extras. And considering that the extras are needed to attract some much needed sales, they do add some good value to the package.

The main extra is the feature length Commentary track with director Guy Ritchie and somebody else who introduces themselves so fast I couldn't pick out their name. Unfortunately, Ritchie doesn't lend himself too well to the audio commentary and, although quite possibly an interesting track to some, he doesn't half waffle on and it quickly becomes rather tiresome to listen to. Also, Ritchie reveals a fair bit about the storyline so ensure that, if you do fancy auditioning the commentary track, you only do so after having first watched the film (and as recommended by Guy Ritchie too).

The sixteen minute featurette The Concept : Interview with director Guy Ritchie and editor James Herbert has the two guys talking about the films concept. Whilst I'll acknowledge that Revolver is a bit of cryptic film to say the least, Ritchie appears to spend most of the interview struggling to explain to concept, not only to the interviewer, but to himself too. Whilst it's an interesting interview, with a few clips from the film to help things along, it's mainly Ritchie who does the talking whilst Herbert occasionally interjects with some of the interesting editing techniques used in the film.

Next up are twenty-four minutes of Deleted Scenes which were trimmed for pacing purposes or giving too much information away. There's a brief introduction from director Guy Ritchie who explains that the original opening voice over was dropped because it gave too much away whilst numerous other deleted scenes also attract a brief voice over introduction from Ritchie. Naturally, some of the special effects are not complete, but all in all, these deleted scenes are of good picture and audio quality and are worthy of a look in. Each scene is also chaptered so you can easily navigate through the set.

The twenty-four minute The Game : Making of Revolver featurette goes behind the scenes and looks at the various parts of the production. With plenty of on set footage and interviews with the Guy Ritchie, Jason Statham, Vincent Pastore and André Benjamin, they're all on hand (with the exception of Ray Liotta) to explain the story and that the script was changing on a daily basis (probably nothing unusual there for a movie). Oh, and let's not forget the usual universal praise for the director from just about everybody going. As a making-of featurette, it's certainly one of the better ones out there in DVD land.

Things are neatly rounded off with four minutes of unfunny Outtakes, a nicely presented ten minute scored and rolling Gallery of behind the scenes and publicity footage and, last but not least, a rather good Music Trailer (or more appropriately, music video) for the film. So, all in all, a very good set of extras indeed that help make this disc even more of a worthy proposition.

When I was offered the chance to review a preview disc of Revolver I jumped at it. After all, all I'd heard about the film was negative reports in the press and via word of mouth (of people who no-doubt hadn't seen the film) and it was about time I made my own mind up. And with Guy Ritchie's disaster of a movie Swept Away still on peoples minds, I was all ready to provide that favourite pastime of the British - knocking people whilst they're down. Unfortunately, I was to be disappointed as Revolver is one heck of a film and I've no idea why the critics were lining up to pan it (although if it's the Daily Mail doing all the panning then you'll know its bound to be a film worth watching).

Perhaps the real reason that so many people panned Revolver is simply because it's one of those films that requires you to use your brain, and in Revolver you really do have to think to stay on top of things. Most people simply go to the cinema to escape reality and be entertained by some trashy pop-corn movie, and I'd be a liar if I didn't also admit to occasionally being one of those sheep too. But with thought provoking films such as Donnie Darko and The Butterfly Effect widely criticised for being boring or hard going, it's easy to see why "thinkers" regularly get the thumbs down.

Sure, Revolver does contain some some very odd moments, especially when Jake starts to argue with his inner self in a bizarre and psychotic way, but the way that this is all encompassed by Guy Ritchie's absolutely stunning cinematography and complex story telling, it really is something to behold. Even Jason Statham manages to put in a career best acting performance and, dare I say it, more or less "showboats" his way through the film. And if that weren't enough surprises for you, there's even some animation thrown in for good measure. It's all extremely weird, very dark, but totally compelling, and dare I say it, awesome viewing. And it's a British film too!

Beware though, Guy Ritchie has moved onto another level and this is no Lock, Stock and Two Smoking Barrels comedy gangster look-alike. If you're expecting anything similar then you're going to be sadly disappointed. If you're one of those, then avoid. But for everyone else, highly recommended.