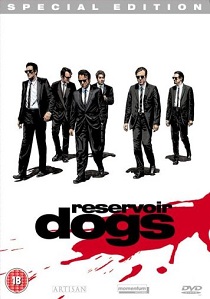 There's a diamond robbery to be performed and big time robber Joe Cabot has arranged a team of players to pull off the heist. But in the event of things going wrong, and to prevent their identities being revealed, each member of the team has been assigned a colour coded alias of Mr. White, Mr. Orange, Mr. Blonde, Mr. Pink, Mr. Blue and Mr. Brown. The plans are made down to the last letter, their identities remain concealed and the weather is sunny and hot. It's the perfect day for a robbery. Let's go to work ....

But something has gone very, very wrong as when they leave the jewellers the police a waiting for them. The gang are not for giving up easily and a bloody gun battle ensues with both gang members and police officers getting cut down in the hail of bullets. But some of the robbers survive the shoot out and they make their way back to their prearranged warehouse hideout to try and piece together the events leading up to the failed robbery attempt. It is only then that they realise that there is a traitor amongst them who tipped off the police. But which member of the gang is it?

For a low budget film the remastered picture has turned out quite well. There are problems with grain, but the picture is bright and colourful with a reasonable level of detail, although the black levels are a bit below par. With the characters wearing black suits, and one member covered in what can only be described as an ocean of blood, there is plenty of scope for problems with outlining and bleeding (to pardon the pun). Fortunately things hold up well enough and although the bit-rate can struggle to remain above 5 Mbps there are no signs of outlining, colour bleeding or pixelisation. For the age of the film and its minute budget the print is also surprisingly free from dirt and dust scratches.

Although this special edition is essentially a copy of the American region one release the disc is missing its DTS soundtrack. However, the remaining Dolby Digital 448Kbps is more than reasonable enough with some clear and precise dialogue in the centre channel. There is the occasional use of the surround channels, but these moments are far and few between, and only then do they tend to be used by the musical score. But with the dialogue being the main focal point of the film, this really isn't an issue.

The extras on this special edition are spread over two discs with the majority of the contained on the second disc and both discs employ a wonderfully animated menu system based on the goings on in the warehouse. It's also the first menu system I've ever come across which uses copious amounts of the f-word. It's certainly fair enough to say that the menu is in keeping with the film.

Extras wise, the first disc contains an audio commentary with writer and director Quentin Tarantino, producer Lawrence Bender and select members of the cast and crew. However, their comments haven't been recorded in a single session but are multiple audio tracks spliced together. Mind you, this hardy matters as the commentary is far from being disjointed and each contributor has plenty of interesting things to say about the story and production. Needless to say, I was rather taken aback by how interesting it really was. The extras on the first disc are rounded off by the ubiquitous theatrical trailer.

Continuing to the second disc of extras, some are better than the others. Highlight has to be the deleted scenes and especially the scenes involving a close-up of the infamous ear cutting scene. And after watching the deleted scenes the rest of the extras seem a bit like padding material. Running at just under a hour, the Original Interviews section is a ragtag collection of interviews with the cast as they recollect their experiences during casting and filming. Some interviews are better than others and if you become bored with one you can either skip to the next interview or choose one from the menu.

The Class of '92 featurette returns to the same Tarantino interview from the preceding interview extra, but this time concentrates on his memories from The Sundance Film Festival. This is the festival where the film received it's premiere and shocked just about every journalist going. The featurette contains interviews with various film critics, who now wildly praise Reservoir Dogs, whilst Tarantino offers his opinions on the film critics who panned his film. Also included in this section is a 11 minute Sundance Institute Filmmakers Lab which contains a number of workshop scenes from the film.

The Noir Files looks at the art of film noir adaptation and contains a number of interviews with Mike Hodges, Robert Polito, John Boorman, Donald Westlake and Stephen Frears. To be honest I didn't find the interviews that interesting and soon got bored. However, fans may be interested in their observations. Following on is the Tributes and Dedications section. This is a collection of interviews with Monty Hellman, Jack Hill, Pam Grier and Roger Corman whilst Tarantino explains the list of dedications noted at the beginning of his script. Things are neatly wrapped up with the short Securing the Shot - Location Scouting With Billy Fox featurette which looks at the film's choice of locations.

Some releases tend to use the "Special Edition" tag to justify charging extortionate amounts of money for a disc which isn't anything particularly special. However, in the case of this special edition there's no doubting it's true purpose as a collectable item, especially when you consider there's a limited edition run of different characters on the slipcases which leaves you with the tricky choice of which one to buy (surely Momentum can't expect fans to buy multiple sets? We're not collecting football stickers here you know!).

But fans of Reservoir Dogs may have grounds to be a little cheesed off at this delayed release. Not only is this edition a rehash of the region one release, but it is also missing the DTS soundtrack and a number of other extras. Wouldn't true fans already have imported this edition or even be reluctant to part with even more cash after purchasing the initial release? Things aren't helped too much by the fact the BBFC banned Reservoir Dogs in the UK for a number of years and thus fuelled the market for grainy pirate videos and imported DVDs.

But for first time viewers, such as myself, it is a great opportunity to see what all the fuss was about and get some behind the scenes information to boot. And whilst Reservoir Dogs may have injected some much need vim into the crime film genre, launching a thousand copies in the process, does the excessive use of the f-word and gallons of fake blood (I'm surprised Mr. Orange made it all the way through the film with the amount of blood he lost!) make the film as "classic" as it was claimed, or did the BBFC do the job by themselves ?

And at risking the wrath of Tarantino fans, Reservoir Dogs is actually nothing that special, well story wise at least. Sure, the acting is top notch and the way the story is told in a "back to front" manner is great, but perhaps it has dated too quickly. The torture scene and the gruesome manner in which the perusing police were dispatched was probably quite shocking back in 1992, but Kill Bill and even The Last Samurai manage to exceed this level of violence without too much disquiet. Has Tarantino simply made this sort of violence acceptable? It's either that or the fact that the CNN generation has become numb from the daily horrors which are splashed across our screens.

Momentum Pictures can certainly label this release with the "Special Edition" tag without feeling embarrassed and it's a title which the legions of Tarantino fans are sure to enjoy. But why wait so long to release this edition in the UK? Did somebody forget they had it or were the recent Kill Bill releases too much of a temptation?